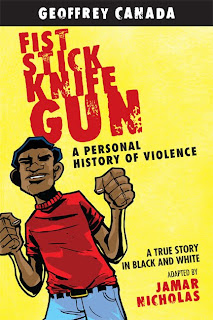 "When I first found out that Superman wasn't real, I was about eight.  I was talking to my mother who declared, 'No, no, no.  There's no Superman.'  I started crying because I really thought Superman was coming to rescue us from the chaos, the violence, the danger.  No hero was coming."

If you have seen the film Waiting for Superman, about the disturbing state of America's public school system, then you have seen Geoffrey Canada, president of Harlem Children's Zone.  Canada also wrote an autobiography about growing up in the South Bronx during the 1960s, and here it has been adapted to the comic format by Jamar Nicholas.  The title remains Fist Stick Knife Gun as a representation of the way violence in the inner city has escalated.  What used to be dangerous, but not necessarily deadly, has become far worse with prolific access to guns.

Canada starts his story when he's four.  His older brother's jacket is stolen at the park, and when the brother explains to their mom that it was stolen, instead of consoling her son, she sends him to the park to get his jacket back.  She would not tolerate her boys becoming victims.  Soon, though, Geoff's education is tackled by boys who live on the same block as him.  It's not so much to incite violence, but to keep safe, to give the block credibility so that no one will mess with people from there.  He learns how to fist fight, how to gauge an opponent.  He gets a knife.  He gets a gun. 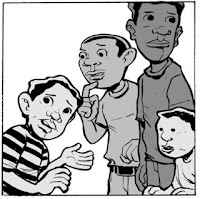 This book is short and very episodic.  Instead of chapter names, there are pictures, icons representing the theme of that chapter.  I am not sure what the original version of Fist Stick Knife Gun is like, but I imagine it's more thorough and detailed.  Here, we get glimpses into Geoffrey Canada's life- the people who shaped him, the lessons he learned, the laws of the streets.  But that's all, just a glimpse.  I think the full autobiography would be fascinating to read.

The graphic novel gave me a lot of food for thought, too, though.  I don't know why, as it seems silly now, but I guess I never thought about children in violent neighborhoods passing on fighting skills to younger people not to go out and attack people, but to defend themselves in situations that arose more frequently than not.  I am not sure what vague idea I had in my head about inner-city violence, but the teaching method never occurred to me.  That whole system- proving your manhood, showing your friends that you can take a beating, showing no fear- makes up the majority of this book.  Throughout, the same lessons are enforced again and again.  If you can't win a fight, you aren't going to make it.  And so each boy goes from being shy and hating the confrontation to slowing learning by fighting his friends, trash talking people he dislikes, getting into wrestling matches, then boxing with bare knuckles, to finding a knife and learning how to use it and then, finally, getting a gun.  Because what is the ultimate form of self-defense?  If you're facing down someone much bigger and stronger and scarier than you are, how do you even the odds?  You need a weapon to even them for you.

It's a sad, if seemingly inevitable, story to tell.  And it's told in simple, forthright language with no apologies or excuses.  It's shared with the help of pictures that are also pretty simply sketched, in black and white and shades of gray, but that convey the characters and emotions quite deftly.

I enjoyed reading this book, but the ending left me scratching my head.  For example, at the end of the book, Canada describes his change of heart as being caused by his Christian upbringing.  However, never before in the book had he mentioned religion.  (Perhaps this didn't make it into the graphic adaptation?)  He also has an afterword describing his work with the Harlem Children's Zone, advocating non-violence for children growing up in tough neighborhoods.  But when he grew up in a similar neighborhood, he learned how to fight because that was his only option.  In fact, the entire book is about learning how to stand up for yourself, physically, and take a beating to survive.  So the last few pages of giving up the gun and describing his work are great and hopeful, but they don't seem in line with the rest of the book.  And that's why I wonder if I missed something by reading the graphic novel, and not the full-on autobiography.

Books like this often make me think, "Ok, now what?"  Many reviewers have said that they wish they could share this book with their students, or give copies to all teenagers in America. But what will that do?  Show that there is an adult who became a success who knows what they are going through, and writes about it?  I am not sure.  I think these are the sorts of books that reach suburban adults, safe in their homes and on their streets , and make us think, "Oh, thank goodness I didn't grow up there."  And then we go about our merry, oblivious lives.  I'm glad these books are out there to make us think about how the other half, as it were, lives.  And what they are going through.  And maybe try our best to help in our own bumbling, uninformed ways.  I admire Geoffrey Canada.  I think he's done great things and is improving the lives of thousands of kids.  But still, my reaction upon reading this book was, quite honestly... I'm so glad that wasn't me.

Note:  This review is based on an advanced reader's copy.  I received this book for free to review.
Musings by Aarti at 11:07 PM