This weekend, I attended the Revitalization & Business:  Focus Detroit Conference.  It took place both in the city of Detroit and here in Ann Arbor, at the business school.  It was an excellent conference on many levels, and so I am going to use this space to tell you about it. 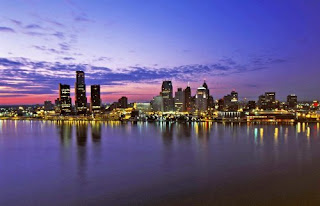 Detroit gets a bad rap.  I used to spend at least a week every year in Michigan, and now I live here.  And I can count the number of times I have been into the city on one hand.  People are terrified of Detroit.  They think it's unsafe.  That no one would ever choose to live there.  It is a city in the Rust Belt, home to the embattled American auto industry, suffering from massive emigration from its once-vibrant center to the sprawling suburbs and other areas of America.  It is full of abandoned buildings, crime and corrupt politicians.  More than any other place in the country, Detroit has come to symbolize America in this recession- an economy past its prime and going into decline while faster, smarter, cooler cities hurry to replace it.

But that's not the Detroit residents see.

They see grand old architecture (<-- click on the link!), open space to grow food to feed a city, blank canvases that beckon artists, a culture of community and innovation, and a region that just needs people to believe in it (and live in it) for it to get back on its feet, dust itself off, and become great once more.

Bill Ford (yes, of the Ford family) gave a speech at the conference and said that he hates the amount of sympathy Detroit gets.  This is not a region that wants your pity, he said.  And, one after the other, we heard from entrepreneurs and artists and community members from the city and while they were not so explicit in their words, the same theme was everywhere:  Detroit is a vibrant and beautiful city.  It's just that the rest of the world isn't looking at what's there. 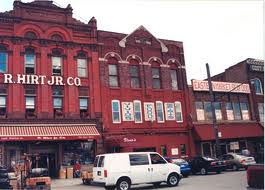 There's Model D, an online magazine that focuses on Detroit's distinct neighborhoods and spotlights people making big stuff happen all over the region.  There's Torya Blanchard (<-- click that link, too!), who cashed in her 401K and opened a French creperie which is now a huge destination in the city.  And former male model Phil Cooley who came back to his hometown to open up one of the world's greatest barbecue restaurants, Slow's.  The Eastern Market, one of America's largest and oldest public markets, open every Saturday with stalls and stalls of food, toys and crafts.  Powerhouse Productions, using art as a means of developing community and engaging neighbors.  Not to mention the magnificent Henry Ford Center, impressive Institute of Arts and newly renovated Art Deco Book Cadillac Hotel.

Detroit is full of people who believe in it.  Yes, the stories about abandoned buildings, crime and massive unemployment are true.  But what's also true is that this is a city of entrepreneurs, idealists and artists.  This is a city on the brink of what could be an amazing success story.  In fact, it's a city that is already chock full of success stories.  People just don't know about them.  So I'm telling you.

There is a lot of gloom and doom in the news every day, about horrible crimes, rampant corruption and the decline of America as an economic powerhouse.  But there is a parallel reality, just as strong, that's comprised of success stories and people pursuing their dreams and making the little pockets of the world in which they live better.  A lot of those people live in Detroit.  And they're proud.

Detroit Lives.  (Requires a much bigger time commitment, but well worth the investment - make sure you see parts 2 & 3, too!)
Musings by Aarti at 6:30 PM