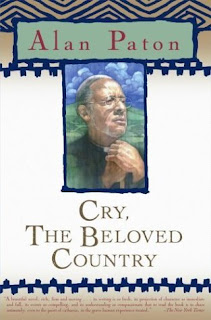 I was struggling to choose a book to read to start the year off and saw this one on the shelf at my parents' house.  I picked it up mostly because nothing else on the shelf appealed to me, and as soon as I started reading it, I couldn't put it down.  Cry, the Beloved Country has a very different and sometimes difficult to follow writing style, but it is so, so well-written and so achingly good that I couldn't put it down, unless it was to pick up a tissue and wipe away my tears.

Stephen Kumalo is a Zulu pastor in rural South Africa.  He receives a letter one day urging him to Johannesburg as his sister is very ill.  Kumalo also has a brother, a nephew and a son in Johannesburg.  He hasn't heard from any of them since they left, and he and his wife worry about the fates of all of them.  Kumalo leaves almost immediately for the city, and while it bewilders him, he also comes across great kindness.  He finds his sister, and his brother, and his son, and also forms a true and lasting bond with a white man who lives nearby.  Through Kumalo and the white man, Mr. Jarvis, we see South Africa in a period of drastic change, just before Apartheid becomes law.

I don't think my plot summary above does justice to the intricacies of this book.  It is the first book I read this year, but unless it is the best reading year ever known to man, I already know it will be very high on my Best Of 2011 list in twelve months.  There is so much here- the care of a man for his son, the love of a man for his country and the faith of a man in his God.  The writing is absolutely gorgeous, but I struggle to find a quote to share that conveys the depth of emotion I felt reading this.  It is a very sad book, but sometimes those are exactly the books we need to read.  I enjoy a happy ending as well as anyone else, but I also enjoy a really good cry now and again, to know that there are things in the world that move me so deeply.  There is such compassion in this story.  Paton is one of those rare people who can write a story populated by flawed characters without passing judgment; rather, he makes the reader see just how much suffering a person goes through, and just how much impact a small kindness can have.  A few examples of his writing:

-Will he ever return? he asked indifferently, carelessly.
-I don't know, she said.  She said it tonelessly, hopelessly, as one who is used to waiting, to desertion.  She said it as one who expects nothing from her seventy years upon the earth.  No rebellion will come out of her, no demands, no fierceness.  Nothing will come out of her at all save the children of men who will use her, leave her, forget her.

-How much is your charge, my friend? asks Msimangu.
-Two pounds and ten shillings, umfundisi.
Kumalo feels with shaking hands for his purse.
-I should like to help you in this, says Msimangu.  It would be my joy to help you.  You are kind, says Kumalo trembling, but no one must pay but me.  And he draws the notes from the dwindling store.
-You are trembling, my friend.
-I am cold, very cold.
Msimangu looks up at the cloudless sky, from which the sun of Africa is pouring down upon the earth.  Come to my room, he says.  We shall have a fire and make you warm again.

Slowly he followed the bent figure up the street, saw him nodding as he walked, saw the people turning.  Would age now swiftly overtake him?  Would this terrible nodding last now for all his days, so that men said aloud in his presence, it is nothing, he is old and does nothing but forget?  And would he nod as though he too were saying, Yes, it is nothing, I am old and do nothing but forget?  But who would know that he said, I do nothing but remember?

Hopefully, in the quotes above, you get a sense of Paton's writing style.  It is unusual.  If you were to start the book in the wrong mood, or struggle through the first few chapters and not find a rhythm, you might be tempted to give up and put the book down.  But don't.  You'll have done yourself a great disservice.  This story is worth the effort.

I am basically gushing with no real information here, so I'll try to come to the point of why this book had such an effect on me.  I mentioned before the writing style, which Amanda points out in her excellent review reminds her of John Steinbeck's The Grapes of Wrath.  I would absolutely agree with that, especially in the two or three chapters that do not advance the plot but are more side stories about the South African experience in general, much like Steinbeck's chapters about the Depression experience in general.  Paton does this with great skill.  He uses words sparingly, but to great effect.  It is amazing what effect they have.

I also loved that there were no "villains" and no "victims" in this story about race.  Both Kumalo and Jarvis were such sympathetic characters and the scene of their first meeting is one of my favorites in the book.  I fell in love with both of them.  And while religion is deeply woven through every thread of this book, it never felt preachy or weighed down.  Instead, it hit a natural tone and balanced perfectly with the great love for country that was present throughout the entire novel.

This was a beautiful, heartbreaking read.  Highly recommended.
Musings by Aarti at 11:07 PM