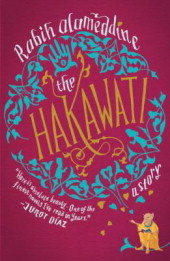 I was lucky enough to do another buddy read with Heather from Raging Bibliomania to close out 2010, and it was a great way to end the year!  This time, we chose to read The Hakawati, a modern-day story wrapped up in a fabulous re-telling of the Arabian Nights.  We both really enjoyed the story, particularly being able to discuss it with each other!  But this time, rather than sharing with you our conversation about the book, we thought we'd just swap reviews.  So below are Heather's very eloquent thoughts on The Hakawati.  My thoughts are much the same, but if you want to read them in my less-beautiful writing style, feel free to hop on over to Heather's blog to see them.

Heather, I'm so glad to have read this with you!

Random side note:  I think every cover of this book is GORGEOUS, so I'm sharing them all in this post :-)

When Osama al-Khattar, a Los Angeles software engineer, returns to Lebanon in 2003, it's not for a celebration or a light-hearted visit. Instead, Osama has come to sit at the bedside of his seriously ill father, sharing stories with him during the final days of his life. As Osama relates his history and the history of his father and grandfather, he weaves miraculous and wonderful fairylike tales throughout his story. From Fatima, the woman who seduced a djinn, to Baybars, a lowly serf who rose to be one of the most generous and beloved leaders of the land, Osama shares it all. As he relates the story of how his parents met, or how his grandfather, a once admired storyteller called a hakawati, became who he was, or how his beloved uncle Jihad began to feed his love of stories from an early age, Osama spins fanciful and colorful yarns about heroes both mythical and strange. Scattered throughout these colorful stories, a picture or war torn Lebanon begins to emerge, from the casual bombings of the 70's to the barren wasteland that stretches across the countryside today. Paired with the Arabic fables and the modern day story of the bedside vigil over Osama's father, Alameddine treats his readers to a feast of otherworldly and impressive stories of yesterday and today.

At first I found this story a little confusing because there seemed to be no narrative segue way between what had come before and what was coming next. From paragraph to paragraph, you just never knew which story was going to pop up. For a while, I was lost in trying to figure out what direction the story was going in and why all of these disparate elements seemed to be crowding in on each other. But by the second or third chapter, things began to make more sense and it actually became delightful reading it blind and never knowing which character or story was going to take the stage for the moment. Swirling around the present narrative were all kinds of stories of harridans and kings, slaves and djinnis. It was a heady concoction, kept on a tight pace and moving along as if it glided on casters.

The story I most enjoyed was the long and segmented tale of Fatima. Once a simple household slave sent on a mission by the king, Fatima is waylaid by an angry djinn who is infuriated by her arrogance. This leads Fatima into the depths of the underworld where she overturns the terrible vengeance that has been wrought upon her and strengthens a lifelong friendship with the imps that come to protect and love her. As Fatima resurfaces, she becomes beloved by the once angry djinn and bears his child in addition to helping the queen bear the royal heir. The two strangely becomes twins and come to love and rely on each other more than anyone else. Much to the queen's chagrin, both boys regard Fatima as their true mother, which sets off some explosive and shocking events that almost destroy the boys and the people around them. Fatima's story was sprinkled between the other tales and it became the one piece that I hungrily searched out and savored.

I also liked the story of Baybars and his compatriots. They were a misshapen group of rag-tag soldiers who had to pit themselves against many a greedy and ambitious foe in order to create peace in the kingdom. As Baybars rises in the ranks, more and more honors are bestowed upon him, making him, in effect, the golden hero that comes to encompass all that is peaceful and good. There's a point in the story where Uncle Jihad mentions that the the actual Baybars was a bloodthirsty and vengeful man with the ability to create such good PR for himself that his beloved mythos is all that remains of the once fierce warrior. I thought that bit was very interesting because it's representative of how a lot of heroes have reinvented themselves based on good PR rather than the real facts that surround their exploits. As it was, the story of Baybars was more of the action/adventure part of the novel, whereas the Fatima story was more of the love/romance portion. They balanced each other perfectly in my opinion.

The modern day story held less appeal for me because it was more of an everyday story and had a lot less of the fantastical elements that I was coming to expect in the intervening sections. This isn't to say that I didn't like it, because that would be false. I found Osama's family to be filled with peculiar characters and as such they furnished a lot of curiosity and sparked an almost voyeuristic reverie in me while I was reading. Aarti and I agreed that the most fascinating of the bunch was Osama's mother, who got far too little page space as far as I was concerned. She was a strong female lead and had such a presence about her. I would have liked to have been more immersed in her story, but that was not to be. Osama's family was portrayed very earnestly, warts and all, and through the feuds and emotional minglings they came to represent the backdrop of all that was solid and enduring about family life. It was touching to see the way they all gathered around the bedside of the ailing man, going so far as to bring their traditional holiday celebrations to the hospital so they could share them with him.

Though this was a rather long read, it never got overbearing nor repetitive as I had feared it would. By exploring so many alternate stories and housing them within the walls of a more restrained narrative, the story became thrilling and had much in common with The Arabian Nights. There were more stories in this one book than you could shake a stick at, and that's one of the things I most enjoyed, as it lent an atypical flavor to the whole book. Since I hadn't been too familiar with Middle Eastern fables, this book fell on grateful and interested eyes, and I had a great time delving deeper and deeper into all the wonderful elements of this book. Though the book is certainly an investment in terms of time, it's a great investment and was such an intoxicating read that I won't soon forget it. Imaginative and fully engaging, this is a book you won't want to miss. Recommended.
Musings by Aarti at 7:00 AM