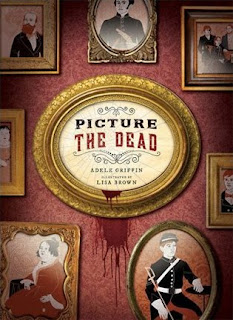 P
Picture the Dead is one of those books you see in a bookstore, pick up and thumb through, and then clutch to your chest as you move towards the cash wrap, as though someone might steal it from you.  I had this book in an advance reader's edition, but I know that the hardcover edition will be beautiful and well worth a purchase.

Adele Griffin (two-time finalist for the National Book Award) has written a wonderful story about a family of old money living in a dank, dark and empty home in Boston during the American Civil war.  Jennie lives there at the mercy of her Uncle Pritchett and his wife.  She is lonely- her twin brother Toby passed way in the war and she finds out very early in the book that her fiancee, her cousin Will, also died.  The only Pritchett soldier to return home is Will's brother, Quinn.  But Quinn was never warm, and now he is chased by ghosts and is full of secrets- some of them Will's.

One day, when Jennie goes with her aunt, uncle and Quinn to get a family portrait done, she is briefly visited by Will's angry ghost.  This sets her off on a course to learn what happened to her beloved fiancee in the war.

I really, really enjoyed reading this book!  I admit that a large part of that was for the illustrations.  Lisa Brown, the illustrator, did a great job designing a Victorian-era scrapbook which aids Jennie in telling her story.  In fact, readers know the climax of the book through the illustrations well before we hear of it in the written story.  I think the illustrations were great here- scrapbooking was very popular during the Victorian era, and I think both the author and illustrator really captured the feel of the era through this method.

This book has a very Gothic atmosphere, which complements the era.  So many during the Civil War became interested in Spiritualism- making great attempts to contact family members lost in battle.  I liked how Griffin brought that aspect into her story as well.  Really, the Victorian era was as much a character in this book as Jennie was.  Boston, with its snobbish, status-obsessed-but-money-poor families, was a perfect setting, and Pritchett House, with its imposing columns and fading grandeur, was also very evocative.

I appreciated Griffin's ability to call attention to many aspects of the war that are often under-valued.  The Civil War was the first major war to be documented through photography.  Photography- as art and hobby- has a large role in this book.  Griffin also touches on the ability of war to corrupt and change people who live through it.  And on how the people left behind can become faded husks of their former selves- as they continue to age and grow, but their loved ones are not there to grow with them.  She also talks about how often, men in war don't die in battle glory the way most letters home state they do.  Sometimes, those letters are lies to appease family, but that doesn't make them wrong.  (Note:  This seems very common in military letters as it was also touched upon in The Things They Carried.)  No one wants to imagine a corrupted family member.  Or, even more so, one that suffered for days or weeks before passing away.

These smaller details really made the story more real to me, and brought the Civil War era so much more to life.  Of course, these details were aided by the great scrapbook illustrations provided.  The whole package was just very well-put-together.

I think this is an excellent book to read over a gloomy weekend.  I loved the combination of story and photography, with a dash of Victoriana and a smidge of Gothic horror.  Highly recommended!

This review is based on an advance reader's edition.  I received this book for free to review.
Musings by Aarti at 12:05 AM