Joint Musings: The Absolutely True Diary of a Part-Time Indian 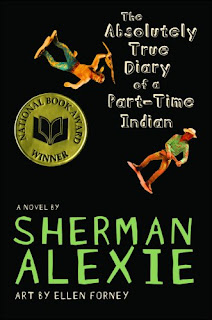 Some time ago, Natasha and I decided we wanted to read more Native American literature.  The first book we read together was Sherman Alexie's fabulous The Absolutely True Diary of a Part-Time Indian.  The next book we are reading is Bury My Heart at Wounded Knee, which we just recently found out is not by a Native American, but we want to read it, anyway.  Native Americans have been silenced and shut away for centuries in America, and Natasha and I are really excited to learn more about the culture.  We also became complete Sherman Alexie fangirls after reading this book.

The Absolutely True Diary of a Part-Time Indian is a young adult book set in Washington state on a Spokane Indian reservation.  Junior, a 14-year-old with a stutter and a brain condition, goes to geometry class on his first day of school and notices that his textbook is the same one that his mother used when she learned geometry.  His book is thirty years old, at least.  He gets so angry at this fact that he throws the book at his teacher and gets suspended.

This leads to him deciding that he will never get off the reservation or make anything of himself unless he gets a good education.  Junior decides to enroll in a neighboring all-white school.  His new classmates are not overly welcoming and his old friends think he has betrayed his Indian culture.  Junior has to find a way to keep his identity and follow his dreams.

We reference a certain interview fairly often in our conversation below, so here is a link (to my alma mater!) that has the full text of the interview.

The first half of this review is on Natasha's blog, so check that out first!  I am in the blue text below, and Natasha is in black.

(cont'd) I think Alexie does a great job of exploring this idea without getting caught in the trappings of cliche because he really just brushes on the idea- Junior doesn't feel angst-ridden and he doesn't spend pages and pages talking about how attending an all-white school makes him less of a Native American- he just does it and deals with the fall-out in his own way.  I think that's how most people deal with things, personally.  Not many kids spend time worrying about losing their culture- they're trying too hard to fit in and find a place for themselves in the world.  The whole "cultural identity" thing only really comes later.  I think Alexie was true to that.  And I liked what he mentioned in the interview about white people writing about Native Americans being "colonial," and that it's a valid way of writing, but should be discussed in context.

Really, at this point, I'm just a big Alexie fan!  I want to read everything he's ever written!

I think you're right about cultural identity being something that sometimes is thought of later. Junior knew he couldn't forget who he was (and people weren't going to let him) but he knew that he had to fit in and that's where Gordy comes in, helping Junior to learn how to really study. Junior's journey would have been so much harder academically and emotionally if Gordy wasn't there to help. Especially considering that in real life, Alexie stated in the interview that he's the first and only person in his family to graduate from college. How horrible.

Yes, that struck me, too!  He seems to have lifted himself up with almost no support.  Though perhaps he had emotional support, but just not a mentor?

It made me sad when I was reading the interview and Alexie said how there isn't an Indian Emily Dickinson or Walt Whitman or Shakespeare.

It saddens me, too, though, that he chose those three to compare Native Americans with.  All white and Anglo-American.  As though Native Americans always have to compare themselves with the "colonials," and not just on their own merit, or the merits of other culture.  Though really... considering how decimated the population is and that there are so many problems on the reservations themselves, it seems so unlikely that anything will change for the better, doesn't it?

I think when Alexie compared Native Americans to "colonials", he was saying how there's not the equivalent in Native American culture and I think that's true. There are a few well-known N.A. authors but not many.

Right, I think that is true of many indigenous races- the Aborigines in Australia, many tribes in Africa and, to a lesser extent, the Maori in New Zealand.  It is so sad that the entire collective wisdom of so many people can be lost to the extent that it has.  Have you read the book 1491?  It touches on that a bit- about how much loss the world has suffered in terms of culture and art and innovation due to the wipe-out of Native Americans.  I highly recommend that book!

When I think of well-known N.A. authors, the first people that comes to mind are Alexie himself, Ai, and David Truer. N.A. are the indigenous people of America but they're almost an invisible race. It's says something when Alexie said in the interview that Native Americans are "30-40 generations behind in writing".

Yes, that was startling.  And depressing.  But a lot to think about.

I'm hopeful that things will get better. I know there's organizations like Habitat for Humanity that are trying to make reservations more liveable. But I don't know. Alexie did say that reservations were a kind of concentration camp. It would probably take N.A. moving off of these lands but that would mean a drastic change in culture.  This is such a difficult and complex problem.

We definitely need to read more things by Alexie.

Absolutely!
Musings by Aarti at 12:07 AM