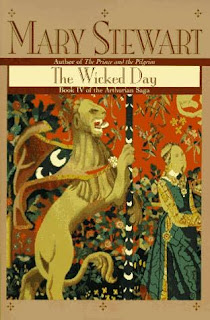 z
The Wicked Day is the fourth and last book in Mary Stewart's Arthurian saga, following the three books that make up her Merlin trilogy.  Stewart's Merlin trilogy is my favorite Arthurian retelling- I read it about five years ago, but I was never able to bring myself to finish the series.  I don't know if this happens for any other Camelot fan, but it's always hard for me to read the last book in an Arthur series because it's very sad and I like to escape that fate as much as possible.

But recently, I looked at my shelf and The Wicked Day begged me to finally pick it up, so I did.  And while the story is sad and fateful, I enjoyed it.

The Wicked Day tells the story of Mordred, Arthur's son by his half-sister Morgause.  He grows up on an isolated island in the Orkneys with foster parents, until Morgause decides she wants to be involved in his rearing so that she can use him as her tool to bring down King Arthur.  She takes Mordred and her other sons with her to Camelot, where Mordred meets his father.  Everyone in Britain knows Merlin's prophecy that Mordred will be Arthur's downfall- but even so, father and son become close confidantes and Mordred struggles against the knowledge that some way, some how, he will be the one to kill his beloved father.

I really enjoyed Marion Zimmer Bradley's The Mists of Avalon not only because of the story but because she presented so many of the women in a different light.  I've never quite been able to believe that Morgause/Morgaine was as evil as she was made out to be after reading Bradley's book and now, after reading Stewart's The Wicked Day, I feel so deeply for Mordred as well.  I love authors that do this!  Take a much-maligned, hated person and bring them to life so fully realized and easy to love.

Mordred, for much of the book, doesn't really know his parentage.  He doesn't fit in anywhere and so he learns very early to read other people well and to hold his own counsel.  But he also knows that he would be a good leader, that he has it in him to be a successful king.  It was really fascinating to see Mordred develop as a character, and it was impossible not to feel for the struggle.  It seemed so much like Oedipus; Mordred spends years knowing that he is to be the cause of his father's death, and he tries so hard to avoid this eventuality, but he knows that, truly, he has no choice.

In her afterward to the book, Stewart says she doesn't believe the traditional view that Mordred and Arthur fought on different sides or that Mordred killed Arthur.  She presents evidence to support this, too.  However, as she wrote this book after her Merlin trilogy, which already had set up the story, she had to be true to tradition.  But she refused to make Mordred out as a villain, and so we lucky readers instead are presented with a very complex man.

While I really liked Mordred, I did not buy into the last 50 pages or so of this novel.  I think Stewart rushed the entire conflict between Arthur and Mordred. It was very hard to believe that such a massive misunderstanding could take place in such a short amount of time between two people who knew each other so well.  I couldn't quite suspend disbelief enough.  I think this has more to do with Stewart herself not quite believing her own story.  As I said before, she wrote an afterward stating that she didn't think Mordred and Arthur would fight on different sides.

I am currently trying to finish all the fantasy series I have on my shelves before starting a new series, and The Wicked Day was my first book with that goal in mind.  I'm very glad I read it as it gave me a new perspective on Mordred.  However, it doesn't quite live up to Stewart's Merlin trilogy for me.

I think I've said it before, but it bears repeating:  if you haven't read Stewart's Merlin series (The Crystal Cave, The Hollow Hills, and The Last Enchantment), then I highly recommend doing so.  It is wonderful!
Musings by Aarti at 12:00 AM