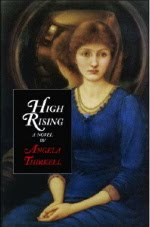 My goodness, how was Angela Thirkell sitting on my bookshelf for so long without me realizing that I should pick her up and put every single book she's written immediately on my TBR pile?

I don't know where I first heard about Angela Thirkell or even how I got the one book of hers I do own, High Rising.  But I am thrilled to know she has written dozens of books and I think she may be yet another Georgette Heyer to me- a true comfort read full of humor and wit and kindness.

High Rising is where Laura Morland lives.  Laura is a middle-aged widow, mother to four sons, who writes fun and thrilling stories that revolve around the fashion industry in 1930s England.  Her youngest son, Tony, is eight years old and talks about nothing but trains- to an exhausting degree.  She also has many friends in the neighborhood, including her secretary Miss Ann Todd, her good friend and fellow author George Knox, her hilarious maid Stoker, her publisher Adrian Coates, and many more.  But George has a new secretary who seems a bit deranged and likely to ruin all that Laura values about her home life.  High Rising is a quiet, gentle story that follows Laura's attempts to understand George's secretary, "the Incubus," and help all her friends to happiness along the way.

I really enjoy books like this.  They are simple tales that rely not so much on plot as on characterization and dialogue.  There is so much wit in this book (which is why Thirkell reminds me of Georgette Heyer, her contemporary).  So much light, frothy humor.  In fact, I think the whole "incubus" mystery thing rather detracted from the story.  It was very random and poorly done and I would have much preferred it to have been left out.  High Rising is more like a series of small episodes that occur in rural England after the first world war.  It's lovely and sweet and uncomplicated.  It was so much fun to read, and I look forward to reading many more novels in Thirkell's fictional Barsetshire.

One of my favorite parts of this story were just the quiet jabs that Thirkell puts in it, gently mocking people of all ages.  For example, while Laura is listening to her son's interminable chat about trains, the narrator says, "He suffered from what his mother called a determination of words to the mouth, and nothing except sleep appeared to check his flow of valueless conversation."  So funny!  And Tony isn't the only one who is skewered for intelligence.  Many other characters are as well.  It was so refreshing to read a book in which characters enjoyed each other's company but were very aware of each other's shortcomings.  Even Shakespeare isn't immune to the jests.  As George Knox complains,  "It is astounding, Laura, how loudly Shakespearean actors can talk, and yet be perfectly unintelligible."  I don't know why, but I feel like in the earlier part of the 20th century, people were very open about everyone's faults :-)

I mentioned before that I didn't like the "mystery" aspect of this book and that is mostly because it isn't really much of a mystery.  It is so weird having The Incubus in the story at all because she is so strangely dark and disturbed while everyone else is just so witty and lively and enjoyable.  She just didn't fit in at all.

Other than that, though, this book was great fun to read!  I am so excited to hear that Thirkell has so many other books for me to read and discover!  It doesn't seem like she gets very much attention (though I have seen reviews of her book Wild Strawberries around).  This seems to be fairly typical of the writers who wrote in Britain between the wars- for some reason, so many of these works seem to have been lost.  That is sad to me, and so all I can say is that if you find Angela Thirkell on a shelf somewhere- pick her up and read her on a down day :-)

Also, just on a (fairly depressing) side note:  whenever I read books set in Europe either before WWI or before WWII, I always find myself wondering if the younger male characters made it through the war alive or undamaged.  In this book, I wondered about poor little Tony who loved trains so much.  I know that they are fictional, but I can't help but dwell on this sometimes.  Do you ever wonder this, too?

Note:  From what I can tell, one of the newer editions of High Rising has atrocious editing.  Beware!  Mine is an older copy (different than the one above), and its editing was fine.
Musings by Aarti at 12:01 AM