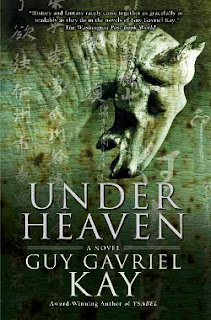 Guy Gavriel Kay's newest book, Under Heaven, is a fantasy novel set in an alternate 8th century China (called Kitai).  Tai is a young man who has just completed the required two years of mourning for his illustrious army general father.  Tai pays his respects by venturing to a far-off battlefield where tens of thousands of Kitan soldiers died while fighting the Tagurans.  He spends his two years burying these soldiers (from both sides) properly so that they can be at rest.

This earns him the gratitude of both the Kitan Emperor and the former Taguran enemies.  So much so that that the Taguran queen offers him 250 Sardian horses- the best horses ever and extremely valuable, particularly in a charged political climate- in gratitude for his service.  This gift is a curse as well, though, as it forces Tai to become an important player in a political game that is often over his head.

He must travel to Kitan's capital, Xinan, to determine what to do with his gift.  But all is not well there.  The aging emperor has cast aside his wife for a very young, beautiful concubine.  The first minister and the most favored general despise each other and could cripple the whole empire.  And Tai's sister, Li-Mei, has been sent as an imperial bride to the nomads by their politically connected ambitious older brother.  Tai must find a way to stay alive and do what he thinks is right in a world that is increasingly complex and full of gray areas.

I was so excited to be offered an ARC of this book to read and review here because I really love some of Guy Gavriel Kay's books.  I am a huge fan of both The Lions of Al-Rassan and A Song for Arbonne.  Kay is an author, though, who sometimes seems to write to formula.  For example, multiple books have prologues that end in the same way.  He has a very annoying "pairing up" habit in which he'll put two characters left single at the end of the book together, regardless of whether the personalities match.  He is also very, very wordy.  He will never say with three words what he could say with ten.  Preferably involving as many commas as possible.  He likes to say things like, "It was, he thought, unfair."  "She was, he realized, looking at him."  "This required, he decided, some thought."

Regardless of that, I still love those two books and I was excited to get this one.  It says a lot, right, that his writing style often annoys me but I like his books so much, anyway?  There is no prologue in Under Heaven and he seems to have tamed his "pairing up" thing, which is much appreciated.  He still does the unnecessary-phrase-set-off-by-commas thing.  And he is still long-winded.  Instead of just saying, "The emperor entered the room.  Tai bowed," he will say, "The emperor entered the room.  Tai bowed.  There was nothing else for a man to do but bow when the Imperial ruler of the civilized world, who had killed two brothers and a cousin to get to that position, who had stolen his son's wife to be his own concubine, and who now wanted to meet Tai, entered the room on a jade throne worth more than Tai's 250 Sardian horses."

So I guess it is clear that parts of this book really irked me.  More stylistically than anything else.  For example, all the female POVs in the story were told in the present tense, but all the male POVs were told in the past tense.  Why?!  What does that accomplish?  It was very hard for me to get involved in this story until about halfway through, when Tai finally made it back to the capital, Xinan, and we met the more subtle and interesting characters.

After that, though, I was really into it.  The action finally picked up and the political machinations became more complex.  And I finally started liking some of the characters and caring what happened to them.  I read the second half of the book in a much more engaged way than I read the first half.  And while this is not my favorite Guy Gavriel Kay novel, I felt satisfied with the story at the end.

I am really happy that the East is showing up more in fantasy fiction.  I think Kay did really well in presenting ancient China and he made me want to look more into the machinations of the 8th century and just learn more about life in Imperial China, generally.  It was a very rigid and traditional system and I think it would be fascinating to know more about it.

The fantasy element in this story is very light; there is little magic.  Kay's writing takes place on a different world, but he focuses much more on people and the effect that individuals have on events and history.  In that way, they're fascinating.  Kay makes a point of showing how people can be skewed positively or negatively by historians and poets.  And how some people who are so vital to the outcome of events can become so obscure in history.

There is also a lot of poetry in this book.  I am no judge of poetry- I was not over or underwhelmed by the poems presented.

So overall, I enjoyed this book, though it took me well over 250 pages to feel really engaged with the story.  If you are willing to make that investment, then I think you'll be pleased by the end result.  But if you must only read one Guy Gavriel Kay book, then I still whole-heartedly recommend The Lions Of Al-Rassan above all other books.

Edited to fix many small errors- sorry!
Musings by Aarti at 12:16 AM