With Reverent Hands: Bridge of Birds by Barry Hughart 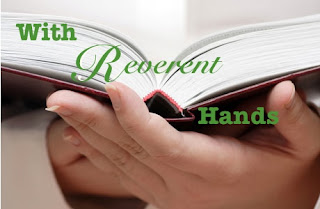 
Rosie's Riveters ended last week, after a run of sharing with us 28 women- real & imagined- who impacted the way we see females in stories.  Rosie did an excellent job of highlighting well-written women, be they heroines or villains, and I am so glad that people participated in the series.
But now it's time to move on.  Instead of highlighting one particular character who stands out to you, I'm asking you to highlight one book.  One book that you adore, that you prize, that changed your life, that you would save from a burning building, that you found serendipitously on a library shelf or at a used bookstore, looking lonely and ignored.  A book that thrills you but that, you have come to realize, no one else has really ever heard of, much less read.  With Reverent Hands is all about those books- the ones that deserve a wider audience than they are given and that you want everyone to go out and read, even if they are out of print.

If you would like to participate in With Reverent Hands, please comment on this post and I will send you a template!
So here we go- my first offering for you all, that I bring with reverent hands!  And a huge thank you to Jason, who made the badge above! 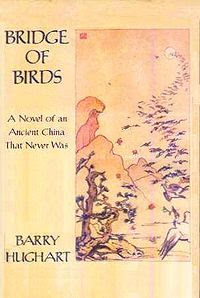 What book are you highlighting?
Bridge of Birds, by Barry Hughart
When did you first read it?
I had this book on my shelf for years.  I don't even know how I first heard about it.  I think on a Yahoo! groups somewhere.  And then everywhere I searched, it got amazing reviews.  So I finally took it with me on my trip to India last summer after Heather recommended it to me and it was amazing.   Luckily for me, there are two sequels that I hope to get my hands on!


What is it about?  Please give a brief summary.
It's a fantasy novel that takes place in "an ancient China that never was."  It revolves around a young man, Number Ten Ox, who must save the children in his village from a wasting disease, and so goes to the city to get help from Master Kao Li, a sage with "a slight flaw in his character."  The two go off to find an antidote to the disease, traveling all over China, meeting wonderful characters, learning lessons of faith, generosity and friendship, and then return triumphantly home.

What makes the book stand out to you?  Why do you love it?
It is so funny.  Just a lovely light, almost ironic humor.  It proves that the author really understands his world, the people in it, and their foibles.  Like Blankets, he does not necessarily like the world and its inhabitants, but he never mocks them or treats them as being less than him, just because they are different.  And the gentle irony is, to me, very reminiscent of Jane Austen.
I love it because it manages to combine fantasy, adventure, friendship and a touching story all together in one excellent book.  It is small, but it packs a punch.  Also, I know so little about Ancient China, so it was wonderful to be taken there and introduced to its stories and folklore through this book.


Please finish this analogy:  If you liked _____________, you'll probably enjoy this book.
If you liked The Princess Bride, you will probably enjoy Bridge of Birds.
What sort of person would you recommend to read this book?
I think anyone who enjoys Terry Pratchett would like this book because of the humor in a fantasy world.  I think anyone who likes Jane Austen should read this book because of the irony employed in it.  Anyone who enjoys stories about the Far East would like it.  Anyone who enjoys historical fiction, particularly from several hundred years ago, not just a few hundred years.

"Take a large bowl," I said.  "Fill it with equal measures of fact, fantasy, history, mythology, science, superstition, logic, and lunacy. Darken the mixture with bitter tears, brighten it with howls of laughter, toss in three thousand years of civilization, bellow kan pei - which means 'dry cup' - and drink to the dregs."

Procopius stared at me.  "And I will be wiser?" he asked.