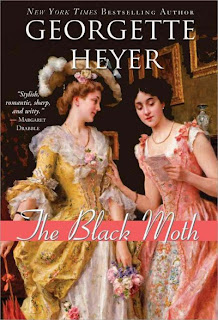 The Black Moth is Georgette Heyer's first novel, written while she was a teenager.  She uses updated versions of some of the characters in her more popular novel These Old Shades (which is where the title These Old Shades comes from).  In mid-1700s in England, an earl has passed away, and his eldest son must be found to impart the news.  The son, Jack Carstares, however, was disgraced six years ago when he accepted blame that should have been his younger brother's for cheating at cards.  After years abroad, John is now "working" as a highwayman in Surrey.  His younger brother Richard has aged unnaturally since the cheating incident and is married to a temperamental beauty who is likely to bankrupt him and possibly leave him for another man.

And then there is the dangerous and enigmatic Duke of Andover (known as "the Devil") who is pulling all the strings (particularly those attached to the purse).  He falls so deeply in love with the lovely young Diana Beauleigh that he attempts a kidnapping, only to be foiled by Jack Carstares.  This sets off a chain of events that changes everyone's lives in dramatic (and thoroughly entertaining) ways until everyone is sorted out and settled to live happily ever after.

Though I have long been a Georgette Heyer fan, I never read The Black Moth because I don't like These Old Shades.  Why read the precursor to a book I didn't enjoy?  When Sourcebooks offered me this one to review, I accepted because I felt it was time I read Heyer's first book.  I'm glad I did so for my own sake, but as I expected, The Black Moth is nowhere near my favorite Heyer novel.

Heyer writes very authentic to her period, littering her stories with slang and references to gentlemen's clubs and gardens that most modern readers would not understand.  The Black Moth is no exception and the quirks of language (using "an" instead of "if," for example) can make it difficult to establish a reading rhythm.  Also, there are very few characters in this novel with whom it is easy to sympathize.  Jack and Diana are intelligent and funny and beautiful, and some of the minor characters are fun, too, but most of them were hard to like.  And the plot is just so dramatic and swashbuckling that it was easy to believe Heyer wrote this book as a teen.

I appreciated this novel more for the insight it gave me into Heyer's writing than for the story itself.  You can see glimpses of the style Heyer will evoke in all her novels here- the witty manservant, the bumbling inn keeper, the hero who appears to be a fashionable fop but is actually quite intelligent and sharp, the selfish and profligate beauty, the wicked but strangely attractive villain... it's all here!

Another aspect of Heyer's storytelling that I find fascinating is the psychological beliefs held at the time.  For example, the Duke of Andover's whole family spends well beyond their means and has to beg, borrow and steal money from others to meet "debts of honor" (gambling debts).  But they never seem to make any effort to improve themselves, instead blaming it on flaws in the family character and cheerfully continuing to pile on debt after debt.  Heyer strongly believed that some people were born to be rich and some were born to be poor, or that some were born to be Gentlemen and some were born to be Commoners, and that never the two 'ere meet.   It's interesting to see that at play even in her earliest novel.

So while I recommend Georgette Heyer's historicals and mysteries to anyone with a love for witty dialogue, light romance and an authentic setting, I would not recommend starting with The Black Moth.  Rather, read some of her other works first and then come back to this one later to see where she started and how she developed.  It's more fun that way because while the story is entertaining, it's not her best.

Note:  Once again, I take issue with the Sourcebooks cover art.  I have no idea who the two women on the cover are supposed to be, and I don't think they really pertain to the story at all.  As far as I recall, there was never a scene with two ladies reading a letter.

I received this book for free to review.
Musings by Aarti at 12:07 AM