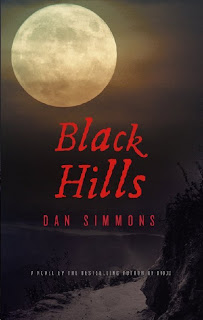 Paha Sapa experiences this more than once with people.  He has Custer's spirit in his head, but he also can see the pasts and futures of many people he meets, including Crazy Horse.  During his initiation ceremony to become a man, Paha Sapa also experiences a terrible vision of the future; four large stone presidents of the United States careening across his beloved Black Hills, eating everything in their sight and leaving all behind them to waste.  Paha Sapa grows up as his Lakota family and the other native tribes of the Great Plains die out.  He comes to the decision that he must destroy these stone presidents before they destroy his land.  So he sets out on a plan to blow up Mt. Rushmore before the monument is complete.

I don't know how to review this book because my experience of it took me so far out of the story.  Paha Sapa is a wonderful character; he is so good and so kind and so aware of his culture disintegrating around him.  He is a complicated person who hates what the white settlers have done to his land but who also respects and admires their ingenuity and passion.  He is one of the most achingly lonely characters I have met in a very long time.  He is kind to everyone, but is set apart by his race and by the ghost in his mind and by other people's memories crowding out his own memories.  I fell in love with him and his quiet dignity.

I also enjoyed the story and Simmons' storytelling approach.  There is a true sense of immediacy for the reader in each chapter.  The narrative jumps around a lot, from the 1870s to the 1930s and between Paha Sapa and General Custer.  One thing I found odd but eventually grew used to is that all dialogue is done in italics, with a dash in front.  There is really never a "he said" in the whole book.  This was confusing at first, especially when two characters were talking to each other, but eventually I got used to it.  I also was initially confused by the jumping around in the dates, but eventually settled in.  I think this book begs for a re-read so that I can appreciate all the subtleties in the writing when I go back, knowing the story's full arc.

Native American history is conveniently swept under the rug in history class; no one wants to hear about how their exalted country decimated an entire population.  When Native American history is taught, the tribes are often grouped together as one people, which is unfair.  And they are given these almost mystical qualities of defending the planet against the ravages of greedy white people.  It is just as unfair to set people up as idealistic and simple tree huggers who couldn't save the planet from Capitalism.

Simmons doesn't play this card in his novel and I'm happy for it.  There are moments of idealism in the book, yes (particularly the last thirty pages or so), but his characters also acknowledge that the tribes of the Great Plains were not perfect.  They had petty feuds, senseless slaughter and numerous wars well before the whites arrived.  Rather, Simmons shows us the emotional toll that westward expansion had on one Lakota man, and how his life was affected by it.  It's a very intimate and highly moving portrait.  While I think the ending of the book was very protracted, it certainly gave me a lot to think about with regards to the future.  And I enjoyed getting a sense of General Custer, though the first few chapters from his point of view were far more erotically charged than I'd ever have expected from a man with such serious sideburns.

But I must admit that while I enjoyed this book and appreciate Simmons' storytelling abilities, I much prefer it for opening my eyes to my own ignorance.  I am grateful to Black Hills not for telling me a beautiful story but for making me see the void in my education where American history and the "Indian Wars" are concerned.  I know nothing about General Custer but that he lost a huge battle.  In my memory, that makes him a "loser" in a very vague sense of the word and completely negates his exemplary leadership skills in the Civil War.

History also has a way of erasing personality.  Custer comes alive in this book, and never moreso than when Paha Sapa comes face-to-face with the broken, deaf and disheartening 91-year-old Libby Custer, the love of Custer's life (and the subject of the erotically charged chapters I mention above).    He says after Paha Sapa's encounter with her old, withered and crabby self, "You should have lived for yourself, Libbie Bacon, not for your dead husband. You should have celebrated life, not my death, and you should have become a lover again and awakened every day you could with another man's head on your pillow and your head on his."

And so I greatly appreciate Simmons' novel for reminding me, gently, that a person should not be defined by one battle, or one moment, even though history makes it so easy to do so.  Those larger-than-life statues of presidents, those monuments to war heroes and the blurbs in the history books obliterate the very real emotions and passions and beliefs of the people they strive to remember.  And they often completely leave out the details of the people who were left behind, or killed, or decimated in quests for glory and land and gold.  Black Hills is a good story, but I like the book because it reminded me that it is too easy to have a vague idea of history that can, quite frankly, be inaccurate.  Or at the very least, only tell half the story. 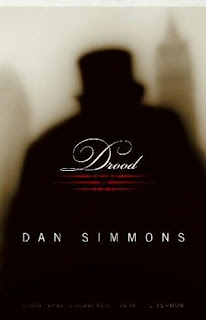 To celebrate the release of Black Hills, Hachette Book Group is giving away three copies of Dan Simmons' previous bestseller Drood to BookLust readers!  The contest is open to residents of the US and Canada (no PO Boxes, please).  To enter, just leave a comment with an email address and telling me what your favorite Victorian novel is.  Entries accepted until 2/17.