Review: The Queen of Attolia 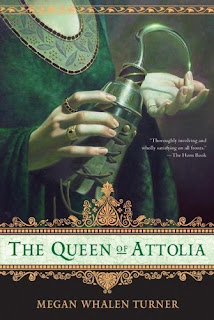 Title: The Queen of Attolia

See my review of The Thief (Book One) here.

Amazon.com Review
In the firelit torture chamber the executioner's sword descends--and the Eugenides--the Thief of Eddis--no longer has his clever right hand. The Queen of Attolia sits calmly and watches the dreadful amputation behind her carefully cultivated mask of coldness, but later agonizes over what she has done to him. At the same time, she rages at herself for not hanging her captured prisoner outright. Readers who first met Eugenides as the rascally teenager Gen in the Newbery Honor-winning The Thief will find that in this sequel he deepens through suffering and loss, but keeps the same witty talent for elaborate, crafty schemes of espionage and theft. Caught between two rival queens in a landscape based on that which surrounds the Mediterranean Sea, Eugenides is loyal to Eddis as her Queen's Thief, but in love (despite himself) with the beautiful and seemingly ruthless Attolia. In her small mountain country, Eddis controls the only bridge between the valley nation of Sounis and the coastal kingdom of Attolia, while all three are threatened by the ships of the powerful Medes. As the web of intrigue and shifting allegiances expands, and war is imminent, the Queen's Thief risks everything on an audacious and cunning military strategy to bring the two queens together--and to steal Attolia for himself. This remarkable fantasy, with its appealing characters, emotional intensity, witty dialogue, and inventive plot, will have teen fans panting for more.

It is rare (except for the past two weeks or so, I admit) for me to read a book and its sequel one immediately after the other. It is also rare (except in the past two weeks) for me to read so many books so quickly. But I guess August is the month for me to get everything done, since I think September will be very quiet for me. I will be in India starting August 23rd, and I'm not sure how much time I will have for updating and posting to the blog, though I anticipate having a lot of time to read. So... here's hoping I leave you all with as many posts as possible to account for my loss during September ;-)

The Queen of Attolia is the sequel to The Thief, and book two in The Queen's Thief series. There are currently three books in the series and I hear a fourth is due out next year. In my previous review, I said these books are children's and young adult fiction. I don't know if I would still mark them as such. This is more for my own vanity, as I found some of the political and militaristic strategies and maneuvers hard to follow. So, if I can't understand them, I assume a 10-year-old can't. A flawed chain of logic, I know, but one that makes me feel better about my own intelligence level.

This book is much, much more involved than its predecessor. Sadly, most of the characters that played a large role in the previous book are barely glossed over in this one. The plot thickens and writhes and becomes far more complicated, involving alliances, wars, treaties, lies and sabotage. All within 360 well-spaced pages. Really, if George R. R. Martin or Steven Erikson had written this book, God knows how long it would have been. Luckily for us, Turner skims over the actual battles and focuses on the strategies behind them. It makes for very interesting reading. And a significantly shorter book than it could have been.

What is great about this book- still marketed as children's fantasy- is the depth of its characters. Everyone has so many layers and levels and nothing is quite as it seemed in the first book. People we really like do things that don't settle well with us. People we would love to hate somehow are redeemed. And the book doesn't end with any sense of "Happily ever after." Rather, it ends on a wary but hopeful note that carries us with the tide into the next book. Kudos to Turner for refusing to make her characters more clean-cut and cookie-cutter like than she wanted- these are real people who make real decisions, and then have to live with the consequences of those decisions.

I did have quite a bit of trouble swallowing one major plot twist, and that somewhat hindered my enjoyment of the book as a whole. And in this book, there was only one story to stand as an example of the wonderful mythology Turner breathed into existence with her pen. But other than that, the characters were flawed, fascinating and alive. The plot moved quickly and smoothly. The setting is firmly entrenched in the author's mind and imagination. And I am very eager to pick up the next book in the series!
Musings by Aarti at 10:57 PM