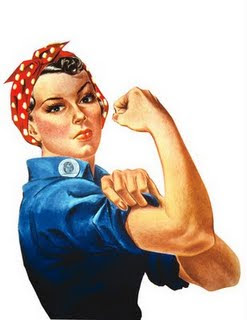 This week's post is by Mike, a real-life friend whom I met through other friends. He is sadly blog-less, but I'm sure I'd follow his blog if he had one. Mike lives in the Twin Cities and reads books across all genres. I have personally not read any books featuring his riveter yet, but I may have to pick one up soon after reading this post...

Who is your Riveter? Anna Pigeon, park ranger What book does she feature in? She features in Nevada Barr's series of mysteries. Two of my favorites are Ill Wind and Deep South, though there are many others. Each book is independent, though some supporting characters recur. Do you love her or hate her?

The first thing that comes to my mind is that she's a cop. She has the attitude and outlook on life 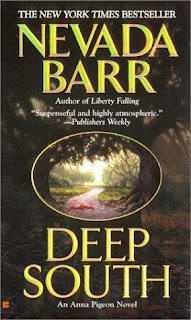 that can only come from being a long-time cop; I don't know how better to describe that part of a personality. But she isn't like a cop out of CSI or that you might know from walking a beat--park rangers are somewhat different: they don't usually go on the power trips that you might see on TV.

She's a middle-aged woman who has fought her way up in a male-dominated profession, and has the battle scars and defensive sarcasm that comes with that. She's kind and caring, fiercely independent, and tends to recklessly charge into tight situations.

The comparison that I keep coming back to is Hillary Clinton. She's got a take-no-prisoners attitude and isn't interested in your BS, but isn't afraid to show a more tender side from time to time.

She talks like a park ranger and a cop. She thinks and acts (for the most part) like the cops and rangers that I've known. She's got a sarcastic side that feels like it has been developed over years of being "the woman" in a group of guys. The parks are interesting, the stories are well-told, but it's her voice that keeps me coming back.

I admire her ability to get past the politics and bureaucracy and get to being a ranger. I admire her curiosity (they would be really boring mysteries if she wasn't curious) and her refusal to let her gender and size (she's 5'1" or so) restrict what she is willing to do.

Yes! I especially like the earlier books (I mentioned two above). The more recent books are much more towards the suspense-type than the mystery-type of things.

Any parting remarks? Thanks to Aarti for letting me do this!
Musings by Aarti at 2:47 PM