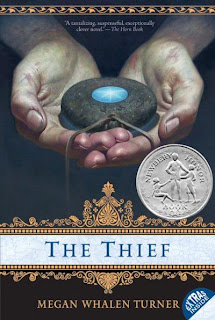 Book One in The Queen's Thief Series

From School Library Journal
Grade 6 Up - Things are not what they seem in this story of wit, adventure, and philosophy. Gen, an accomplished thief incarcerated for stealing the king's seal, is dragged from his cell by the king's magus, who is on a quest. The prize is Hamiathes's Gift, said to be a creation of the gods that confers the right of rule on the wearer. During the quest, the magus and Gen take turns telling the youngest member of their party myths about the Eddisian god of thieves. Turner does a phenomenal job of creating real people to range through her well-plotted, evenly paced story. No one is entirely evil or completely perfect. Gen is totally human in his lack of discipline, seeming lack of heroism, and need for sleep and food. The magus makes the transition from smug, superior scholar to decent guy in a believable fashion. Turner also does a neat job of puncturing lots of little prejudices. There are many deft lessons in this story. As absorbing as it is, the best part lies in the surprise ending. Though it is foreshadowed throughout, it is not obvious?its impact is more like morning sunlight than a lightning bolt. This book is sure to be a hot item with adventure and fantasy lovers, and YAs who like snide, quick-tempered, softhearted heroes will love Gen.

First of all, how awesome is Greenwillow Books?! They seem to publish all the coolest books in young adult fantasy, and I haven't had them on my radar until the past several books which seem to have all been published by them. I strongly believe that readers should support publishing houses that consistently produce good work. So for what it's worth, Greenwillow Books, I salute you! My YA fantasy reading binge recently has been due solely to books published by this publishing house. And since I plan to finish The Queen's Thief series soon, it is likely to continue.

An anonymous poster on my blog, whose identity I still do not know, recommend The Queen's Thief series to me some time ago, on my review for The Angel's Game. The series sounded great, so I added it to my Amazon Wishlist and purchased all three books from Bookcloseouts not too long ago. The first book was a very interesting read and I am looking forward to the next two- thank you, anonymous poster!

I really enjoyed reading this book because it does not talk down to its audience. Turner writes books for children; this book won a Newberry Award. But she is aware of the fact that children are intelligent and that they deserve intelligent writing. She does not write "down" to them. As an adult, I found the story engaging and complex- even the vocabulary was at a more advanced level. I love authors who do this because I think it's important to challenge and stretch your readers. How many people read books that are actually targeted to their age range? Very few, I think. Therefore, it's important to focus more on getting your story and theme across in an interesting way rather than trying to target your age-specific audience. Turner does this very well, adding a twist to the story and giving her characters depths that you don't often find in books for children.

Turner also builds up a multi-layered world in her story. The book is fantasy, and while she doesn't include a map of the world (sorry, Sudha), she certainly builds up the culture. I love fantasy that comes complete with religions, superstitions, fairy tales and history. Turner has all of this in a very thin book. The history and religion in The Thief is based loosely upon ancient Greece and early medieval Europe. We are even treated to three mythical stories in the course of the novel. All great! I love the creation myths in fantasy novels the most- it's fascinating what authors do, when given a blank slate with which to create a new school of thought. We also learn that the countries in the novel- Eddis, Attolia and Sounis- all have long, intertwined histories centering around old gods, new gods and invaders. Really, the amount of detail that Turner manages to pack into the pages is amazing. She creates a fully-fleshed out fantasy world, and I can't wait to read more about it.

I do think that this book was a bit slow going in some ways- not much happened for pages at a time. But Turner meticulously builds a world that readers can believe in, and creates characters that readers can cheer for. And I fully intend to move right on to the next book.
Musings by Aarti at 10:59 PM