Review: The King of Attolia 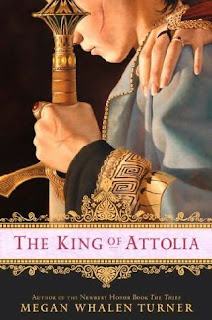 Title: The King of Attolia

See my reviews of The Thief (Book One) and The Queen of Attolia (Book Two).

Favorite Line: Costis straightened, ready to defend his king to the death against this huge Eddisian nanny.

From School Library Journal
Starred Review. Grade 7 Up–Fans whove been waiting for six long years for the sequel to The Queen of Attolia (2000) and The Thief (1996, both HarperCollins) can finally rejoice. [CUT] His attendants and guards mock him behind his back and play pranks on him, all the while thinking that hes too spineless and incompetent to protest. That is, until a guard named Costis punches him in the face and knocks him down. Beheading is the usual penalty for such a transgression but Eugenides devises a better punishment. It is through Costis's eyes that readers see how he and the court consistently underestimate the shrewd young man. This third book in the series continues to involve political intrigue, espionage, and attempted assassination but is less concerned with the fighting between kingdoms that dominated the previous book. [CUT] Although it does stand alone, to appreciate the amazingly charismatic and beguiling character of Eugenides fully, its best to read the titles in order.

Well, I powered through this series! Luckily, there is a fourth book in the works. Good thing, as I don't think I can handle being apart from Eugenides for too long. The King of Attolia picks up almost immediately where The Queen of Attolia left off, but takes the story up through the narration of a new character, Costis, a member of Attolia's Queen's Guard. This makes sense as the drama builds and Eugenides plans become more complicated, but it saddens me. Each book, we are further removed from Eugenides and his thoughts- and he's so fascinating that one can't help but feel it's a loss.

It is hard to review the third book in a series without giving away the plots of the previous two books. Hence my attempts at cutting some of the School Library Journal's synopsis above. I don't want to ruin anything for anyone because this series is a treat to read!

I'll just say that Megan Whalen Turner's writing and plotting are dexterous, as I've come to expect. Er, over the past week, anyway. She manages an intricate, maze-like storyline while fleshing out characters in ways that allow us to get to know them better. At the same time, she keeps them just out of our reach, so that we are continually fascinated by them. I think one thing she managed to convey so well was Eugenides' isolation. It was made so plain and clear, and it was so painful to read through. But brilliantly done on Turner's part.

There is one female character that I cannot warm to. But while she plays a central role, her part, for me, was overshadowed by all the other intrigue. And while I loved reading about all the intricacies of life at a royal court, I did think that much of the book was taken up with walking up and down the palace stairs. It got a little tiring. Probably more for the people doing the walking than for me, but still. I also missed the presence of characters from the previous books- here, we are introduced to an almost entirely new set of characters. Interesting and well-written, all of them. But I still miss the other ones.

Overall, a really rich and well-told story. I look forward to the continuing adventures of Eugenides, and I hope Turner takes us through the rest of her richly imagined world as she continues to write her stories.
Musings by Aarti at 9:27 PM