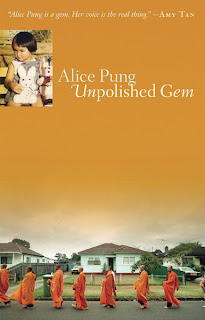 I received this book free from Penguin Books to review.

From Publishers Weekly I was doomed, early on, to be a word-spreader, Pung writes, and her special burden was to tell these stories that the women of my family made me promise never to tell a soul. The stories are not of scandalous secrets or shocking revelations, but of the struggles faced by three generations of Asian women as they settle in a culturally Western country. Pung, a lawyer, recounts the journey her family made over the decades—from China, her grandparents' birthplace, to Cambodia, where her parents are born, through Vietnam and Thailand to Australia where, one month after their arrival, Pung is born. In retelling her grandmother's stories, the imagined is rendered credible; Pung captures her form of magic, the magic of words that became movies in mind. In recollecting her own story, Pung loses that magic in the ordinariness of adolescence, and as the family moves toward achieving the Great Australian Dream, it passes through familiar stages—the hard work of both parents, the distance created between generations and the anxieties suffered by the younger generation (I had done everything right, and I had turned out so wrong). The non-European-immigrant-girl-grows-up story is a familiar one to American readers. What's new about Pung's book is the Australian setting. That twist of focus reveals how more alike than different the experience is.

I am not sure if I think a girl my sister's age should be writing her memoirs. (My sister is turning 28 this year.) Egotistically, I compare people's life experiences to mine, and I don't think I have done anything memoir-worthy yet. I don't think the author of Unpolished Gem has done anything memoir-worthy, either. Basically, she grew up Asian in Australia. That is it.

I have read many books with the "child-of-immigrants-trying-to-assimilate-into-western-culture" storyline (see one I reviewed here). Actually, I live that story. I don't think it can be that different than other people's. But I will get into that later.

I think the story starts strong- perhaps because it is more about her parents and her grandparents than about her. She describes the plight of her mother with empathy- her mother is a strong, intelligent and hard-working woman living in a country where she is completely isolated due to language barriers. She also talks about her grandmother, and her wonderful ability to weave stories with words and gestures and voice inflection.

However, after that, the story goes to Alice herself, and I started to lose interest. It seems like Alice didn't really talk to anyone for much of her life- we rarely hear about her friends, and those that are mentioned only feature peripherally. We don't know much about any of her life that takes place outside her parents' home. Though it seems like she doesn't have much of a life that takes place outside her parents' house. She attends her high school graduation and realizes the only people in school she talks to are other Cambodian/Chinese students. She blames this on her "culture," and the inability for other people to understand it. Also, on her parents' strict curfew. She gets a white boyfriend, whom she breaks up with for reasons that I didn't quite understand. Though she was 18 at the time, so I suppose it is natural to break up with a guy at that age for obscure reasons.

I didn't really love the book. But that said, it looks like Australia doesn't have many books about the immigrant experience in that country, at least based on the newspaper reviews I've seen. In that case, maybe it is an important book.

Back to my earlier statement, though- can the second-generation immigrant experience really be that different than that of the "locals"? And would I even be allowed to ask that question if I weren't an ethnic minority myself? I know that I grew up eating different food than other kids in school, and wearing different clothes... but everyone has quirky relatives, and everyone's parents have odd rules (or an odd lack of rules), right? I enjoy having a very "strong cultural identity." That doesn't mean that every aspect of my life is directly related to being Indian. I feel like some people use the culture thing as an excuse for any issues they may have in their lives. Alice Pung seems to be one of those people. That's not to say that she doesn't have very real problems, or that her life isn't difficult. It is- but they are not all the fault of her parents and her immigrant culture.
Musings by Aarti at 6:53 PM