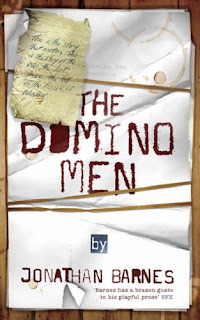 I did not finish reading this book (DNF).

In an earlier century, Queen Victoria made a Faustian bargain, signing London and all its souls away to a nefarious, inhuman entity. Now, generations later, the bill has finally come due. . . .
Henry Lamb, an amiable and anonymous file clerk, pushes paper in the Storage and Record Retrieval section of the Civil Service Archive Unit. His life has always been quiet and unremarkable—until the day he learns that he's expected to assume the covert responsibilities of his universally despised grandfather, now lying comatose in the hospital.
Summoned to the gargantuan Ferris wheel known as the London Eye, Henry receives his orders from Dedlock, a gilled and wrinkled old gentleman eternally floating in a pool of amniotic fluid. London, it seems, is at war, resisting an apocalyptic fate foisted upon it by a long-dead queen. A shadowy organisation known (to very few) as the Directorate wishes to recruit Henry to the cause. All he has to do is find "the girl" and save the world from the monster Leviathan, who can already taste the succulent metropolis that will soon be his to devour. Simple enough.
But there are formidable enemies lining up to oppose Henry, all gathering in and around the royal family. His Royal Highness, Crown Prince Arthur Aelfric Vortigern Windsor—the sniveling, overbored, underappreciated sole heir to the British throne—has been shaken from his resentful malaise by grisly, seductive visions of unrestrained power . . . and by an extremely potent narcotic called ampersand. And an unspeakable evil lurks in the cellar of 10 Downing Street: the twin, serial-slaying schoolboy nightmares, the Domino Men—so-called for their hideous desire and terrifying ability to topple every towering edifice in the city, one after the other . . . just for a giggle.

Gosh, that is a long-winded description of this book. If it takes that long to describe it, you can imagine how long it takes to read it. That is unfair, actually. The book does not take a very long time to read. It is just finding the motivation to do so that takes time.
I read Jonathan Barnes' The Somnambulist about a year ago and reviewed it here. I enjoyed the book for the first half, and then Barnes lost me, and then I lost respect for the story. However, I ended that book with the feeling that Barnes was a promising author to keep on my 'To Watch" list.
So I picked up the sequel to The Somnambulist through Amazon's Vine program. I did not finish it. Once again, the narrator caught my attention at the beginning and held it, but the plot just didn't do it for me. Barnes's plot requires a massive suspension of belief. I read and enjoy fantasy novels; it is difficult for me to do this. It really depends on the rhythm of the story. I think that Barnes has an excellent style of writing- it's the plot that continues to leave me cold. He is so grisly and his story so convoluted that I just didn't care to continue. So I didn't. I could just tell that once again, I was going down bizarre and disturbing twists that I didn't wish to see through to conclusion.

Some people feel compelled to read a book to the end, whether they enjoy it or not. I do not subscribe to this. There are so many books to read, so many stories in which to immerse yourself. Why waste time forcing yourself to read one you don't like when you could instead read one that could leave you breathless?
Musings by Aarti at 8:28 PM