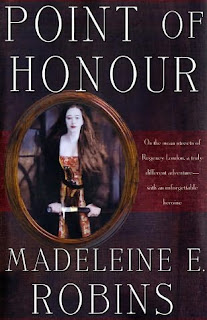 Favorite Line: It is a truth universally acknowledged that a Fallen Woman of good family must, soon or late, descend to whoredom.

This is the first book in the Sarah Tolerance mystery series.  I review the second book here and the third book here.

From Booklist
In Regency England there were very few career options open to a woman with a ruined reputation. Disowned by her family after she ran off with her brother's fencing master, Sarah Brereton returns to England, takes Tolerance as her new last name, and becomes an "agent of inquiry." Hired to find an antique Italian fan, Sarah traces the fan through several owners, but her quest seems to cause the murders of several innocent people. After discovering that the earl of Versellion, Edward Folle, is really the man who hired her, both Sarah and the earl become the target of the killers when the seemingly harmless fan's secret is revealed to be quite dangerous. Robins plays a bit with history, but she effortlessly captures the texture of both the elegant realm of London's aristocrats and the far less glamorous world of those who serve them. As skilled with a sword as she is at uncovering secrets, Sarah is a fascinating heroine, and Robins surrounds her with equally intriguing secondary characters. Politics, deception, danger, and a bit of romance all come together beautifully in this superb debut.

I am a complete glutton when it comes to the Georgian or Regency era of history in England. Really, any non-fiction book I find that takes place within that slim 1770-1820 timeframe... I buy it. I don't even have to be interested in the subject matter. I just have to have it. Same goes for fiction, really. So when I heard about a book that takes place in an alternate Regency world, I snatched it up as soon as possible. What are the chances of a book involving elements of Regency and fantasy?! Too good to be true!

As it turns out, there is no magic or anything fantastical in the nature of this book except that it takes place in an alternate universe. However, even without magic, it's still a good time. I was caught from the first, Austen-esque sentence quoted above. Anyone who can start a book with an amusing Jane Austen reference is a winner to me. Fans of the era and of historical mystery, please don't let the creepy, apparition-like appearance of the pistol-wielding woman on the cover deter you. The writing is good. The cover could use some work. Really, how many women in the Regency era wore their hair down? None that I know!

Which is a neat way to segue into historical accuracy, a driving force in whether or not I will enjoy a book- especially one that is set in my chosen era of existence, if I were allowed to ensure that I would be born an independently wealthy and beautiful aristocrat. Robins makes her home in an alternate universe, with Queen Charlotte the Regent instead of the Prince of Wales, and the Prince of Wales a widower to a Catholic (and thus removed from the succession).

The change in history served the purpose of making the entire premise of the book possible- that a "Fallen Woman" could gain credibility to become a private detective, trusted by High Society to carry out their discreet investigations. This part of the story was hardest for me to swallow (though I did, because it makes it much more fun). Is it plausible that a young lady, fallen as she may have been, was likely to go around cross-dressing and hitting up brothels in very dangerous areas of London? I don't know if I believe that. But hey, it makes for entertaining reading.

There was another plot point that I found unrealistic, but I feel that describing it would be a spoiler, so I will hold my tongue.

Those are my main quibbles with what in all other respects is a really solid period mystery! The alternate history makes an interesting twist which I hope will be taken further in future novels starring Sarah Tolerance. Overall, a fun historical mystery that is a delight to read on the train and after a long day of work. If you like the Regency era, I highly recommend the book.

And if you are a Regency fan and have book recommendations- please let me know! Or if you would like recommendations, I am more than willing to give those out, too. And if you, like me, think that the combination of fantasy novel and the Regency era is like finding Atlantis, then I highly recommend Teresa Edgerton's Goblin Moon. It is one of my favorite reads of all time (sadly out of print and difficult to find) and its heroine, Sera, has a coveted spot on my "Heroines That Don't Annoy Me" list on the right. Sarah Tolerance has not made it to that list- but she has a lot of potential. The next book in the series, Petty Treason, may destine her for fame...
Musings by Aarti at 11:35 PM