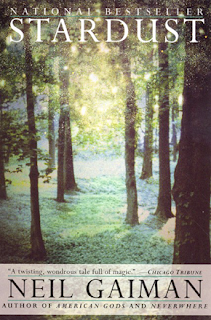 Favorite Line: Have been unavoidably detained by the world. Expect us when you see us.

Amazon.com Review
Stardust is an utterly charming fairy tale in the tradition of The Princess Bride and The Neverending Story. Neil Gaiman, creator of the darkly elegant Sandman comics and author of The Day I Swapped My Dad for Two Goldfish, tells the story of young Tristran Thorn and his adventures in the land of Faerie. One fateful night, Tristran promises his beloved that he will retrieve a fallen star for her from beyond the Wall that stands between their rural English town (called, appropriately, Wall) and the Faerie realm. No one ever ventures beyond the Wall except to attend an enchanted flea market that is held every nine years (and during which, unbeknownst to him, Tristran was conceived). But Tristran bravely sets out to fetch the fallen star and thus win the hand of his love. His adventures in the magical land will keep you turning pages as fast as you can--he and the star escape evil old witches, deadly clutching trees, goblin press-gangs, and the scheming sons of the dead Lord of Stormhold. The story is by turns thrillingly scary and very funny. You'll love goofy, earnest Tristran and the talking animals, gnomes, magic trees, and other irresistible denizens of Faerie that he encounters in his travels. -Therese Littleton

I received this book in July, 2006 from a fellow LibraryThing member as a really nice "You said you'd like to read it, and I have a copy, so you might as well read mine" sort of gift. She also runs a very impressive book blog at A Life in Books. It is one of those BookCrossing books, that you are then supposed to "release" into the world so that other people can enjoy it. Very sad to say that I thoroughly enjoyed the book and wouldn't mind keeping it for myself! However, I should pass on the book karma =)

For me, Stardust was one of those books that you pick up and start reading and think, "Ohmigoodness, how did this ever sit so silently on my shelf for so long when, just reading the first page, I am already completely enthralled by it?!" It is a pretty short, light read. I read it in one day, which is saying quite a bit for me now. I also stayed up until 3am to finish it. Some people seem to preface reviews for books like Stardust with, "It was a short and light read," as though that somehow makes it a lesser book. I don't think this is true. Just because a book isn't complicated or long, that doesn't mean it won't have the power to enchant you.

Stardust is about a young man who sets off into Faerie on a quest for true love, and then realizes that he enjoys the quest itself. As they say, "Success is a journey, not a destination." Tristran Thorn, Yvaine the Star, the Lords of Stormhold, the witches- everyone that populates this story is delightfully dry-humored and fun. If I were Tristran, I wouldn't want to go home, either. Maybe it's because I suffer from wanderlust myself. I can certainly relate to someone feeling that life will be happy and fine if it continues in one very predictable direction, only to have a defining experience that leads you in a very different direction instead. No doubt, if Tristran had never left the town of Wall, he would have settled into a comfortable and enjoyable existence there. But he did leave. And experienced a completely difference life than the one he had planned. I'm not saying that one is better than the other- just that you often don't know what impact a sometimes lightly-made decision will have on your life. It's part of the fun.

The only other Neil Gaiman book I've read is American Gods, and I really enjoyed that one, too. I should read more of him, clearly! Any suggestions on what my next Gaiman adventure should be?

Note: Stardust was also made into a movie. I haven't seen it, but I hear it's quite good. I don't know how true to the book it is. I probably won't see it for a little while, just so I am more objective in my comparison of the two.
Musings by Aarti at 2:05 PM