Review: The Orphan's Tales - In the Night Garden 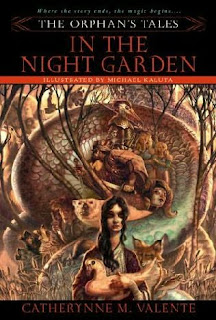 Title: The Orphan's Tales: In the Night Garden

Favorite Line: "Never put your faith in a Prince. When you require a miracle, trust in a Witch."

From Booklist
*Starred Review* The opening volume of the Orphan's Tales begins in a palace garden, where a girl has been abandoned because of the strange, ink-black stain around her eyes and over her eyelids. Because the sultan and his nobles wish to avoid the problem she presents, she is left to wander the gardens, alone until another child, a boy, comes and speaks to her. She reveals the secret of her ink-stained eyes, that they contain many tales. In return for the boy's company, she tells him stories, beginning with the tale of the prince Leander. Each succeeding story grows from the one before it, characters recounting tales they were told and even weaving them back together. There is an entire mythology in this book, in which the themes of familiar fairy tales are picked apart and rearranged into a new and wonderful whole. The narrative is a nested, many-faceted thing, ever circling back to the girl in the palace garden and the prince she is telling the tales to in a wonderful interpretation of what fairy tales ought to be. The illustrations, by Michael Kaluta, constitute an excellent supplement, reminiscent of illustrations of such fairy-tale books as Andrew Lang's, though Kaluta does no toning down for Victorian sensibilities.

I said in my review for The Enchantress of Florence that I like stories within stories. This is usually true, but sometimes it can be a bit exhausting. Valente's book (the first in a two-part series- the second is The Orphan's Tales: In the Cities of Coin and Spice) is a very complex melding of stories within, on top of, next to, and all over other stories. It is a retelling of The Arabian Nights, except Scheherezade is not nearly as interesting as the nameless girl in Valente's tale. But both Scheherezade and the girl in the garden know how to captivate their audience- I was drawn in, ensnared by the stories shared with me. And the book ends on such an abrupt note, with the girl promising more if you just come back to her again... that I will certainly be seeking out the next book.

But really, I don't know if I liked the first one that much, when I think about it. Something about Valente's writing did not jive for me. It is possible this is due to the abrupt starting and pausing and then picking up again of her stories. Unlike The Arabian Nights, where one story leads to another one after cleanly being finished, Valente twists and bends and folds her stories into one another, so that one is embedded in countless others and none of them finishes when you are ready for them to. This is a good way to keep a captive audience, yes, but it can also frustrate them. There are chapters in the book, but once you set the book aside, it is hard to pick up again and remember exactly how many threads and plotlines you are following. Eventually, you catch on again, but it takes some time. Well, I should say that it took some time for me. You all might be much quicker :-)

Also, Valente's breed of fantasy is the kind that I don't generally enjoy. Her stories are littered with strange breeds of creatures (men with dogheads, cyclops, creatures walking on one foot only). While I really enjoy fantasy novels, I generally don't go for the kinds with these random creatures populating them. I prefer the epic fantasy route (peopled with humans, I admit). However, I think if you do like that kind of fantasy, then Valente writes a good story and you will enjoy the world she created. She certainly put a great deal of thought into the mythology and belief systems of her characters.

Overall, I enjoyed the book and certainly will go for the second in the series, but I don't think I'll be reading it immediately. Something about the writing style just didn't work for me right now, and I think it would be unfair for me to read the second book now- so, I am off to browse the bookshelves once more!
Musings by Aarti at 11:17 PM