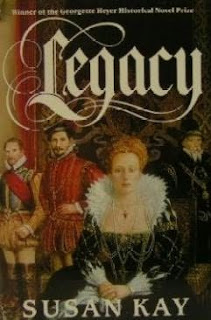 Favorite Line: Perhaps in every thousand years the world produced one man or woman to live in incandescence, enshrined within their span of time.

From Publishers Weekly
Kay's prodigious research buttresses this robust historical romance, winner of Britain's Georgette Heyer Historical Novel Prize and the Betty Trask Prize for a first novel. England's greatest Queen is presented from an intriguing psychological viewpoint- Elizabeth I's need for men and the bondage endured by those she chose. Freely mixing the verifiable with the imagined, Kay traces Elizabeth's rise from lonely childhood to lonely eminence. In the person of Robert Dudley, later Leicester, she creates a romantic fulcrum for Elizabeth's womanliness, delineating the childhood affection for Dudley that flowered in clandestine liaison and may be the closest Elizabeth came to a loving relationship. All of the Court's intriguing personnel, from the ubiquitous, conniving Cecils to the presumptive upstart, Essex, are drawn with care; the turbulence of the period, filled with violent deaths, challenges from abroad, pragmatic liaisons, is conveyed with verisimilitude; the rich tapestry of the Tudor ascendancy is woven with colorful threads. It is, however, the depiction of a woman of whom "half the wives of England were jealous" that lingers.

Well, it's been a while! I contemplated keeping up with the Tuesday Thingers blog posts while on my reading hiatus, but I decided it would be a bit depressing to see six straight entries about books but none that were actually book reviews, so I decided against it. However, maybe I'll start up again with those weekly posts since I have finally finished a book again- and what a dramatic book it was.

It's no secret that I find English history fascinating, and while I prefer the Hanoverians to the Tudors, it's pretty hard not to be intrigued by one of Britain's most historically dysfunctional families. Susan Kay clearly has a fascination for them, as evidenced by her novel that spans about 70 years, chronicling all of Queen Elizabeth I's life.

The book is entertaining- whether it's entirely accurate, I don't know. There are love affairs galore, innuendos everywhere, secrets alluded to but not brought fully into the open, and many conclusions drawn that may or may not be true. It's as much as soap opera as a historical novel (though I would strongly disagree with Publishers Weekly above in calling it a "romance"), and I don't think I can really believe everything Kay wrote and seemed to pass off as fact. But it sure was fun to read :-)

The book has many central characters in it, all satellites around the gravitational force that is Elizabeth. These characters are all well-drawn and could be subjects of complex, critical analysis on their own. But no one really notices them (and by no one, I mean me) because of the Queen.

I think Kay's novel is a success because of how completely mesmerizing Elizabeth I is. She shines from the start and doesn't let up until the very end. She's generous and cruel, happy and depressed, and completely captivating. It is easy to see why she is still seen as a legend today, and her masterful manipulation of not only her own courtiers but those from all over Europe is portrayed perfectly.

The most interesting part to me, though, was the psychology of Elizabeth's character. In Kay's book, she is supremely flawed. She is haunted by the death of her mother, by the actions of her father, and by the effects of both these people on her country and her life. Every one of her relationships has a shadow on it because of her parents. She goes through life believing that perhaps she is a witch. She has trouble getting close to people. She feels the need to be cruel and stand-offish and proud. She feels that she must be married to England, and not to any man.

Why is it that strong women are so often portrayed as ones with no heart, or ones who turn their hearts off for the good of others? I understand that Elizabeth's entire reign was built around the premise of her being the Virgin Queen who toiled for England and not for a husband and family- but why is that the only way it ever seems to work for females? Most male heroes, throughout history, have a female counterpart that they seem to trust and love and confide in, and it never makes them seem weak. But for women, automatically, it is assumed that the man would take over the central role in her life and that everything else would take a backseat to him. And, what's more, if her husband were not to be less important than her work, then something is always, always considered to be wrong with the woman. Well, how often is she considered to be unwomanly in those circumstances?

Elizabeth was ruling a country that was bankrupt and basically in shambles- I think she was quite justified in putting England before any man in her life. But part of the reason she lives on so strongly is because she didn't marry anyone, and that was considered the ultimate sacrifice (and a huge aberration by a royal person, of course). She is remembered in this almost goddess-like mentality of being a strong and able woman who gave up her personal happiness for the sake of her country. But who's to really say now that she gave up her chance at happiness? What if she just really wanted to rule her country and not be bothered by a husband and children who would probably spend a good amount of their time trying to take her power away from her? Is that so wrong? Is it accurate for authors to portray her as a lonely and depressed ruler, just because she was female? If she had been a man, would she be so fascinating to us still? Would people romanticize him the way they romanticize her? There have been many manipulative and cunning men in English history- check out those Plantaganets- so why is it that it's always the women who act in these ways that create such a stir?

Of course, there are issues of sexism throughout history to contend with in all of the above questions I raise, and I understand that there aren't easy answers- but I think that's why Queen Elizabeth is such an interesting figure to so many people. What was it that made her the way she was? When she died, was she content with the way her life went, or would she have preferred it to go differently? Did she want the greatness and immortality, or would she have preferred to be Robert Dudley's wife?

I think Kay confronts a lot of these issues in her novel, and she does not cut Elizabeth short at all. The Queen is even more complex and difficult to understand at the end of the novel than she was at the beginning. And I think that's where the book really shines- Kay doesn't pigeonhole Elizabeth at all, but makes her huge and inspiring, so that we have some idea of what the Elizabethan age must have been like.
Musings by Aarti at 9:46 PM