Review: The Eagle and the Raven 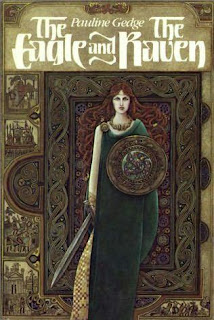 Title: The Eagle and the Raven

Favorite Line: "I learned to roll the dice of destiny."

Spanning three generations, this historical novel tells the tale of Boudicca, the most famous warrior of ancient Britain, and Caradoc, the son of a Celtic king, who sets out to unite the people of the Raven and lead them against Rome. Caradoc's objective is not easily accomplished as the Roman army advances into Britain, raping Celtic women and burning villages to the ground. His efforts are also met with fierce opposition from Aricia, the vain queen of a northern tribe who swears allegiance to the Romans after Caradoc slights her, and from Gladys, Caradoc’s warrior sister who falls in love with her Roman captor. Unfortunately, Caradoc’s endeavors are left unresolved when he is taken prisoner, but Boudicca, a strong-willed woman, ultimately takes up the cause that was Caradoc’s legacy.

The front and back cover of this book is very misleading- it implies that the book is all about Boudicca, but she only really comes into the book in the last hundred pages or so, though she makes brief appearances throughout the story. Most of the book is about Caradoc, who was the first uniter of the native British tribes against the Romans.

I first became interested in the British resistance to the Roman invasion upon reading the Manda Scott series about Boudicca which begins with Dreaming the Eagle. In that series, Caradoc also plays a major role, though Scott certainly focuses on Boudicca more. In Gedge's novel, Caradoc takes the spotlight. And deservedly so.

Caradoc led a very large contingent of Britons against the Romans, but was caught and taken to Rome as prisoner, where he and his family lived out their lives in a gilded cage. A tragic way to end a life.

Unfortunately, also not an interesting way to finish a book. There was a lot of The Eagle and the Raven that took place with Caradoc and his family in Rome, but the plot... didn't really go anywhere. The action was clearly in Britain. Granted, there was not =much= action in the period of time between Caradoc being caught and Boudicca leading an army of vengeance. But I would have preferred that time to have been spent with other characters, and not trying to develop a storyline that really didn't go anywhere.

However, other than that minor quibble, I found this book enjoyable and interesting. It took me a LONG time to read it, admittedly, but I was never bored. Anyone who has an interest in ancient British history would enjoy it, but don't read it thinking it's all about Boudicca. It's not, but that's not a negative point. Recommended!
Musings by Aarti at 9:07 PM