Review: And Only to Deceive 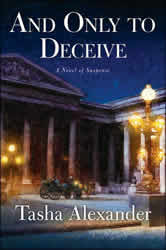 Title: And Only to Deceive

From Publishers Weekly
In this charming late Victorian romantic suspense novel, Emily, a young and beautiful widow, regrets her husband's African hunting expedition death less than is proper. The late Philip, Viscount Ashton, had a passion for classical antiquity, and Emily, in an attempt to get to know her husband postmortem, uses her newfound independence in London to study it. In the process, she forms a friendship with Cecile du Lac, a Parisian of a certain age, and realizes that there was more to Philip than she realized—including his genuine passion and love for her. The charming Colin Hargreaves may have been involved with Philip in art forgeries, and Andrew Palmer proposes to Emily and then offers evidence that Philip is still alive. By this time, Emily and Cecile are a well-practiced team of amateur sleuths: Phillip's secrets begin to emerge, and travel to Greece provides the possibilities of a new life. Alexander makes Emily light but sympathetic, and conveys period flavor without being ponderous. Her knowledge of the ethical dilemmas posed by Victorian etiquette is considerable; sexual chemistry in particular is handled with exquisite delicacy. The archaeological background will lure readers who like to dig for their clues.

It's a very well-known fact that I have trouble finding females I like in literature. I could go on about this forever. Most of them, in my opinion, fit into one of the following categories, or a combination thereof: "I graduated from the school of hard knocks and therefore put up defense mechanisms all around me to seem like a horrible person, but really I will melt inside once the right man comes around and woos me with his gentle yet masculine ways!"; "I hate the societal restrictions put upon women by men and therefore will create a ruckus in every way possible by flaunting every single one, just to be obnoxious!"; "I am beautiful and perfect and everyone loves me, but I pretend not to notice!"; or, the ubiquitous Mary Sue.

Yes, it's true- I'm a woman-hater. So, going into Alexander's novel, with the unpromising tagline involving a woman fighting against the restraints of late Victorian society- well, it wasn't promising.

Maybe I should talk about the good stuff first. The mystery was interesting, the male characters were very fun (I enjoyed the cameos made by Renoir), and generally, I found the book enjoyable. Clearly, as I did give it a rating that was above average. And I really might continue with the series, depending. I feel invested in it, so I could give it a go. Granted, at the beginning of the book, there was an inordinate amount of discussion about the relative merits and demerits of several English Homeric translations (I got the feeling like, in The Historian, the author REALLY wanted to put all of her research into her novel), but luckily this tapered off as the book continued. Overall, it was a quick, fun read.

Now, for Lady Ashton. For those who might have read Georgette Heyer's Regency Buck, Emily resembles no one more to me than the absolutely aggravating Judith Taverner. Of course, she's amazingly beautiful, and smart and witty and perfect- that's a given, apparently, for any strong woman in literature. But she's just obnoxious. For the majority of the novel, she seems to do things just because she wants to annoy her mother. She gets married to get away from her mother (who is fairly over-stereotyped, in my opinion). She drinks port to piss off her mother. She lives on the edge and wears half-mourning for her husband early- to anger her mother. She goes racing through Rotten Row very quickly with a gentleman, to show that she's not to be restrained by society! She makes friends with what might be termed "unsavory types" because no one else should be able to choose her circle for her. She refuses to leave the dinner table with the women because she wants to sit with the men- thereby, basically NOT being a hostess to her female guests, and making her male guests feel awkward. She decides to go to Africa, accompanied only by two men she doesn't know all that well. Etc., etc., etc.

I mean, really, this is the original rebel without a cause.

That's not to say that I don't think women's rights are important. I DO think that there is still a glass ceiling we females face, especially in the working world. But that doesn't mean I would go around doing stupid things, just to prove that I am woman and people should hear me roar. Maybe Lady Ashton's actions above don't seem stupid to you. But to me, they just seem pointless. Clearly, she enjoyed her small victories, but when the goal is to annoy your mother, or to affront society, then just how shallow are you? Overall, she really annoyed me, and while I felt for her plight, I just didn't feel much sympathy for her as a person. She seemed to be a Mary Sue- why did all the men in the book fall for her? (Especially the mysterious, strong, silent one?) They all seemed to think her "independent" streak was charming and sweet and highly attractive. Go figure.

And so my quest for a likable female in literature continues. Oh, I have a few here and there that I like. Anne Shirley, Sophie Hatter, Jehane, Helena, and a few more. But... there aren't many. Why is this? I have a theory I haven't explored very deeply that it has to do with what the characters in particular novels are supposed to =do=, and the whole gender role shebang. Why is it so much easier for me to find male characters I like? Do I just hold females up to a different standard than males? Are female characters harder to write? I don't claim to know. But until I find out, or until I find the next girl to put on my pitiful list of Girls Who Rule, then I shall continue on my merry tripping way, trying to find one whom I enjoy.
Musings by Aarti at 9:26 AM