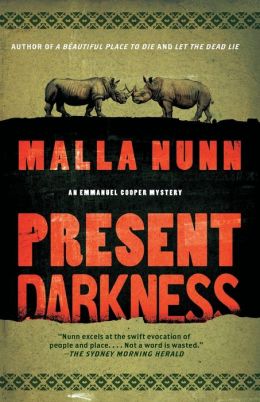 Malla Nunn's fourth book in the Detective Emmanuel Cooper series set in 1950s South Africa really takes the tension up a notch.  In Present Darkness, the accused murderer is Detective Shabalala's son, and Cooper puts his own well-kept secrets at risk to save him.

It's difficult to review this book without giving spoilers for the first three mysteries in the series.  I'll try.

As this series advances, so does apartheid.  And the rules and restrictions that govern everyone's life grow tight as a noose around Detective Cooper, who has more secrets than... someone with a lot of secrets.  And his secrets aren't little, "Oh, I act like I'm a cool, strong man, but really, I'm afraid of the dark" secrets.  They're big, "Hey, I'm living with my non-white lover" secrets.

Once again, the dramatic tension in this book really comes not only from the mystery, but also from Cooper's increasingly complicated life.  You can see the dangerous path he's on, and how likely it is to end badly, but you still desperately want everything to work out for the best.  And because you know Cooper and his mind, you are willing to forgive him his lapses and inconsistencies, even though to someone else, they probably seem pretty despicable.

Cooper's personality and beliefs continue to evolve in this book, though I was a little frustrated that the other characters are still quite opaque.  I would like to get to know Cooper's partner Shabalala better and to know more of Dr. Zweigman's history.  I also felt like Cooper's romantic interest was pretty boring and under-developed as a character; I hope that she gets more air time and is given the opportunity to show us just how strong and interesting she is.  Considering how well Malla Nunn writes her men, I feel confident that she would write her female characters just as deftly, if she'd give them a chance to shine.

This mystery series is one of my favorites, and I hope that Nunn continues to write and give us more Cooper and Shabalala and Zweigman.  I love these characters, and can't wait to see them again!

Note:  I received a complimentary copy of this book to review.
Musings by Aarti at 9:00 AM