Guys!  I went to Japan in May, and due to the long flights and some down time, I got some reading done.  I am reviewing a couple of the books separately, but I think I can do the two below as mini-reviews.  Not because they are not complex books!  But because sometimes, brevity is a virtue, and I need to practice it. 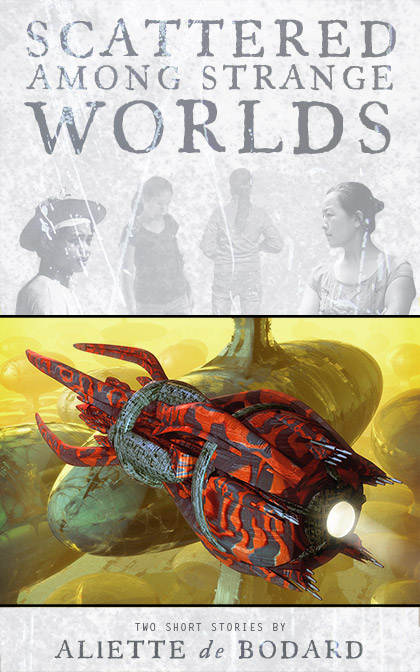 Scattered Among Strange Worlds, by Aliette de Bodard.  I told you before why you should read Aliette de Bodard, and I stick to my story here.  Scattered Among Strange Worlds is a collection of two short stories, one set in the same universe as On a Red Station, Drifting, and one set on Earth, though a future, different Earth.  I enjoyed these stories for many of the same reasons I enjoyed On a Red Station, Drifting:  they center on thoughtful women who are just living each day (though the first story does include the reminiscences of a rabble rouser, who is also a thoughtful woman), and they focus more on civilian life during a time of strife than they do on war maneuvers.

The first story is set at a funeral and has a wistful tone.  It really shows how people start revolutions and movements with a lot of hope and optimism for how things will change, but often ... things don't change that much.

The second story is set in France and the main character is a mermaid.  This story was also about well-meaning people trying to improve the lives of mer-people by bringing them to land, but the mer-people were just unhappy and desperate to fit into a world they did not really like.  This story referenced colonialism to my mind, but I find references to colonialism everywhere.

Both stories were very good, and I plan to read as much de Bodard as I can in future.  I recommend you to do the same.

Yukio Mishima's The Sound of Waves is the only book by a Japanese author I read while in Japan.  I often try to read books written by authors from the place I am visiting, and I often fail at at this endeavor.  I also took The Devotion of Suspect X with me on my trip, but for some reason, it did not appeal to me.

The Sound of Waves is set on a Japanese island during the 50s or 60s.  It's a pretty remote island; everyone knows everyone else, and everyone fishes for a living.  Shinji is a young fisherman who is not particularly smart but is very hard-working and strong.  Hatsue is new on the island and generally pretty, so obviously everyone is intrigued by her, including Shinji.  The two meet and like each other instantly, but it's hard work being secretly in love on a tiny island, and the two become victims of gossip and misunderstandings before long.

This book has won several awards and is something of a modern classic.  I admit that I'm not sure why.  Maybe it was just my translation, but I didn't think it was very memorable.  I did enjoy many aspects of the novel.  There are beautiful descriptions of island life, the theme of Japanese traditions at war with western influence, the impact of cruel gossip in a tiny tine, the sacrifices people make for family.  And it was refreshing to see a story about two teenagers who didn't really have much angst - there wasn't really a love triangle, the two didn't toy with each other's feelings, and they were pretty much completely honest with each other.  Woohoo!  But I didn't find the characters very interesting.  I think Mishima has written longer novels, too, so I think I may check one of those out - perhaps the characters will have more time to develop in a longer form novel and I will be more engaged.
Musings by Aarti at 9:00 AM