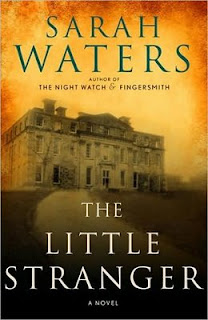 It's been a while since I read a Sarah Waters book, and I had a feeling that her writing style would translate brilliantly to audiobook format.  I hit the jackpot with the audio recording of her eerie Gothic novel The Little Stranger, which is part ghost story, part social commentary, part psychoanalysis and all-around ripping good story.

The narrator is Dr. Faraday, a rural surgeon in post-WWII England who becomes acquainted with the Ayers family of Hundreds Hall when called in to see the house servant, who complains of a violent stomach ailment.  We learn early on that Faraday has a low tolerance for nonsense, as he frankly (and accurately) tells the maid that she is making up her illness and that he cannot treat her for homesickness.

As Faraday begins to interact more and more with the residents of Hundreds Hall - the charming widow Mrs. Ayres; her damaged war veteran son, Roderick; and her plain but kind daughter, Caroline - readers learn of the shabby genteel manner in which the Ayres live.  There is no money to pay for the Hall's upkeep, and the pressure of finding a way to maintain it is wearing Roderick down.  After a freak accident occurs at a small party, the Ayres family begins to fall apart.  And there is Dr. Faraday to narrate their story, and his, to us while it happens.  And readers see in full horror the unraveling of a family and of a man intimately associated with that family.

I should have known that Sarah Waters would throw me for a loop right near the end of this book.  That is just what she does, as I know from reading Affinity and Fingersmith.  And yet when I got to the end, I was completely blown away by what was implied.  It's amazing how well Waters can write a story - the seeds she plants, the clues she offers, the little things that don't come all together until the very end.  And then everything clicks.  Or does it?  I still don't know.  Luckily for me, most of the internet doesn't seem to know what happened, so this makes me feel that at least I am in good company for all my confusion and general !!!!!!-ness about the book.

But, of course, there is more to The Little Stranger than just the ending.  It's a hefty book, and it touches on so many interesting themes.  The one that came through most clearly for me was the gradual decline of the English upper class.  In fact, this book has really motivated me to read the book The Decline and Fall of the British Aristocracy, which I've had on my shelf for years.  Hundreds Hall is just one of many grand old homes that is falling into disrepair, its beautiful parkland being sold for housing estates, its Regency furniture invisible beneath holland covers, and its servant hall nearly empty.  So much of this story is about Britain's attempt to become a more egalitarian society - it's emphasized not only in the decline of the house, but also in Dr. Faraday's growing obsession with the Ayres family.  Does he think that he is now on equal footing with them?  Or does he want to overtake them?  Who really knows what Dr. Faraday wants?

I admit that I didn't particularly like any of the characters in this book.  Dr. Faraday was alright at the beginning, but then he became quite sanctimonious, and then he became unhinged, and that got quite disturbing.  Roderick was more a symbol than a person - he not only symbolized a man without a real purpose, now that all his money was gone, but he also was very damaged from his time in the war, and that came out more strongly than his personality did.  Caroline - well, Caroline wasn't very interesting to me until the very end when she finally stood up for herself and what she wanted, but until then she was more of a wallflower.  I liked the servants, and I really liked Mrs. Ayres, but they had smaller parts in the story.

This isn't really a frightening book to most people, I'd say.  I admit that I was frightened by parts of it, especially keys showing up in the middle of unmarked snow, but I don't think this was written to be a scary story.  It was more about the way in which our feelings and thoughts and actions can seem normal to us but purely malevolent to others.  Mrs. Ayres feels guilty about losing a child.  Roderick is angry about his inability to keep up the house.  Caroline is nervous about Dr. Faraday but doesn't know why.  Dr. Faraday tries to keep everyone safe, but seems to just push them further away.  It's scary because of all the good intentions that go so horribly awry here, and the consequences that those extremes can have.  You end the book feeling quite unbalanced and unsure of yourself.

The audiobook version of this book was absolutely fantastic.  I highly recommend it if you have a long (very long - the book clocks in at around 15 hours) car trip or flight coming up for the holidays.  It keeps your attention riveted!
Musings by Aarti at 7:00 AM