Musings: The Lost City of Z 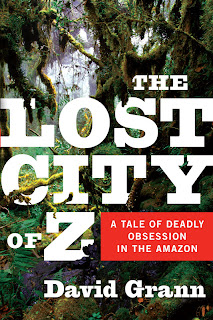 David Grann's The Lost City of Z has been on my radar for a while, but came to the fore recently after I read 1493.  I wanted to learn more about the ancient Americas and the civilizations that thrived there, and Grann's book seemed like a good introduction to the topic.

I listened to The Lost City of Z on audiobook, a format I've found can either be really good or really bad for me.  I have the propensity to let my mind wander while driving to work or working out at the gym.  This is generally not a good idea with non-fiction titles as I lose track of chronology and the cast of characters and then struggle to get back into the groove of the book.  That happened to me with this book, too.  While I found the parts I did pay attention to absolutely absorbing, I must admit that there are some characters who seemed to show up out of nowhere to me and others that disappeared without a trace, and I'm sure that is due to my lapses in attention.

Regardless, this book is pretty riveting!  It's hard to imagine discovering anything these days, but it seems like the last vestiges of the exploratory lifestyle are available to those who trek through the Amazon.  Z is a possibly mythical ancient city of the Amazon, built by a lost civilization centuries ago and then lost to humankind.  Grann tells us about Sir Percy Fawcett, a Victorian explorer who became obsessed with finding Z, eventually disappearing into the wilderness there with his son and a young friend.  The mystery surrounding Fawcett's expedition gripped the world for decades, and Grann takes off to Brazil to see if he can trace the story any better than those who came before him.  Along the way, he tells us about Victorian explorers, explains the "counterfeit paradise" theory about the Amazon being unable to support large numbers of humans in one place (and why the theory might be complete baloney), describes the myriad isolated tribes that still live in the rain forest, and so much more.

I honestly did not know how hostile an environment the rain forest could be until I read this book.  People can get sick from everything here.  It reminded me a lot of the way Charles C. Mann described the colonists in North America nearly starving to death in their first few winters, even though they were surrounded by wild game and fish.  If you don't know how to hunt the fish, then it doesn't help much that they are around you.  Similarly, if you are in the rain forest and aren't sure which vegetation is edible and which will cause you to die a horrible death, then you aren't in much luck.

There were several people in this book who described waking up one morning to find maggots under the skin by their elbows.  Seriously.  And this did not cause them to turn around and go home.  They continued on, enduring even worse horrors than this (apparently, worse things exist than having maggots crawling under your skin.  Who knew?).

While I found the story about Fawcett's search for Z enjoyable reading, I found the context of this book far more interesting.  For example, Americans and Europeans were really enamored with the idea that there was a white tribe of Indians in South America.  They were certain that it was these whites who had founded and flourished in the ancient city of Z.  While I of course found this appallingly racist, it created an interesting dilemma for Fawcett and other explorers in the Amazon.  They were white and had taken all sorts of Exploring Classes at home and conquered their baser instincts so that they could also conquer nature.  But none of them could survive in the Amazon for long without an Indian guide.  So if they were white and couldn't make it in the rain forest, how could they believe so strongly that only whites could found a civilization there?  It takes a lot of mind-bending justification and an unshakeable sense of superiority to never falter in that belief.

Something else that really drew my attention was the whole idea of the Amazon as a "counterfeit paradise," meaning a place that looks like it is brimming with life and would be easy to settle into and want for nothing, but in actuality is a very hostile environment in which maggots thrive, living in your elbow.  According to some anthropologists, the quest for a vast ancient civilization in the Amazon is pointless because humans that live there are always looking only to survive and get by, not to thrive and form great cities and networks.  So people stopped looking for Z.  But is that  theory valid?  It's up for debate, as proven in the last few pages of this book.  You just can't look for an Inca-like civilization in the rain forest - just because there weren't stones involved, that doesn't mean that the civilization wasn't great.

This was an interesting biography-slash-social science book about a little-known area of the world that is fast disappearing.  While I wasn't paying full attention to it the whole way through, that was more my fault than the book's, and I learned a lot by reading this one.
Musings by Aarti at 7:30 AM