Musings: The Richest Woman in America 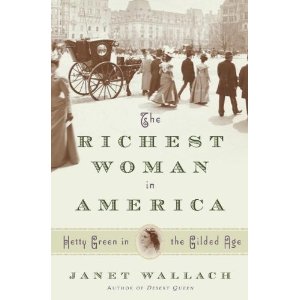 Janet Wallach's The Richest Woman in America:  Hetty Green in the Gilded Age is ostensibly about Hetty Green, a woman who inherited a lot of money, sued a lot of people for even more money, and died even richer than she was originally because she was a very shrewd investor.  She sounds like a really feisty and interesting woman, but unfortunately, Wallach doesn't seem to have had much information about Hetty herself.

The book is very general in tone.  Green was a very private woman, and she wasn't particularly well-liked by her peers.  She wanted women to have access to greater education, but she did not support women's suffrage.  She hated lawyers, but she loved suing everyone.  She used her money to stabilize the financial system and lent money to New York and Chicago, but she also could hold a deep grudge and made sure that those she disliked were punished.  It would have been really, really great to get some insight into her character.  But Green left no diaries.  She didn't share anything very deep in her interviews.  There is no depth to her in this book.  We see her go through the motions of her life and defend what she considered to be her own, but we get no read on her truly complex personality.  For someone who was so rich, she seemed terrified of being left poor and alone and spent very little money.  She didn't get along well with anyone in her family.  She was controlling and paranoid.  But she was also brilliant.  And, for me, Wallach failed to bring that complexity to life and make Green a 3-dimensional person.  Instead, the richest woman in America seemed flat, stingy, and paranoid.

Wallach drew a lot of parallels between life in the Gilded Age and life now.  She compared Hetty Green to Warren Buffett and points out that rampant speculation caused recessions in the late 19th century just as it is doing in the early 21st century.  Not exactly revolutionary thought.  She also shared some of Green's quotes, none of which seemed particularly revolutionary, either.  Hetty Green, for example, believed in buying when prices are low and selling when prices are high.  (Isn't that what everyone believes?  It's the actual execution of this that is difficult.)

The book provides a picture of the financial markets in the Gilded Age, which I enjoyed because I don't know much about that era at all.  But the book did not provide any great detail or insights into a woman who succeeded so brilliantly in a man's world, and that's what I wanted.

Note:  This review is based on an advance reader's copy.  I received this book for free to review.
Musings by Aarti at 7:30 AM