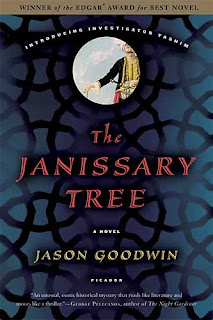 The Janissary Tree is the first book in Jason Goodwin's mystery series that revolves around Yashim, a 19th century eunuch in the Ottoman Empire.  There's not much about that sentence that does not appeal to me.  Historical mystery?  Good!  Very unusual narrator?  Fabulous!  Foreign and relatively unknown setting?  Glorious!

Since finishing up Lindsay Davis's Falco series about a month ago, I've started to look for a new mystery series to sink my teeth into.  Yashim seemed like such a likely candidate, but I didn't enjoy this book to continue on with the series.

The Janissary Tree is about Yashim's search for four missing soldiers.  One by one, the soldiers' bodies turn up out of nowhere around Istanbul, and Yashim is frantic to understand why, and what the bodies mean.  All signs point to the Janissaries, the legendary fighters-turned-domestic-terrorists who were disbanded a decade before the novel begins.  At the same time, he is tasked with finding out who stole the sultan's mother's jewels, and whether this robbery is related to the murder of a harem girl in the royal palace.

The setting for this book was really fantastic.  I felt like Goodwin really knew 19th century Istanbul - its characters, its customs, its food and its personality.  In fact, Goodwin's descriptions of food were fantastic.  Yashim is a main character who enjoys cooking and while reading this book, I had a great desire to explore Turkish cuisine.  I think it must be very aromatic.

Goodwin also had a very wide and interesting array of characters.  This was a boon and a curse, in my opinion.  There were so many characters, ranging from a dull but handsome Russian ambassador to a cross-dressing exotic dancer, that I became overwhelmed.  There were so many people that I couldn't keep straight, and it was very rare for any of them to be fleshed out to the point where I would really care at all about them.  And so many of them were given brief (and unnecessary, I feel) points of view, sharing their thoughts or feelings for a few pages before the novel moved on.  I didn't like being in so many people's heads without really knowing them, and because the novel is fairly short- about 300 pages- I didn't think Goodwin had any real reason to employ at least eight "main"characters and stint them all on personality.  It is possible that, since this is the first book in a series, Goodwin just wanted to introduce us to a lot of characters that will have recurring roles in the future, but I still felt very disengaged from the action because of the huge cast of characters.

And the action itself was really confusing to me.  This I don't blame on Goodwin but on myself.  It seems like Yashim just made assumptions and then acted on those assumptions and then they turned out to be right.  For example, when questioning someone early on in relation to the disappearance of the soldiers, he sees a tattoo that leads him down a certain path of conjecture.  But I didn't really know why that particular interviewee was deemed to be so important, or why Yashim seemed to follow that one hypothesis without coming up with any others.  Similarly, I don't even know how the mystery around the stolen jewelry was solved.  Maybe I was daydreaming through some pages, but for most of the book, Yashim completely ignored that case, and then on one page, he suddenly had solved it and the sultan's mom had the information just in time to avert a major tragedy.  Very convenient.

Really, I'm disappointed this book didn't work out better for me.  All of the separate elements seem so perfect and targeted for my enjoyment, but somehow the novel itself just didn't grab me.  And so my quest for a quality mystery series to enjoy over several years continues.  Any suggestions?  Please do not suggest that I once again take up with Lord Peter Wimsey.  I do not like him, however much he may have been Redeemed by the Love of a Good Woman.
Musings by Aarti at 2:30 AM