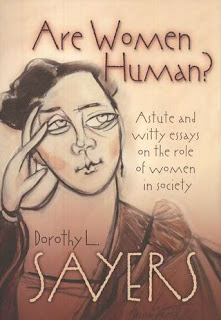 Are Women Human?  Astute and Witty Essays on the Role of Women in Society is a book I didn't expect to like nearly as much as I did.  It's a very slim volume- only 67 pages, and that's with a 15 page introduction- but it was really wonderful to read.  I am really not sure what I think of Dorothy Sayers.  On the one hand, the novels of hers I've read featuring Lord Peter Wimsey present him as an elitist jerk who thinks he's smarter than everyone else and that he deserves all the ridiculous amounts of money that he has.  On the other hand, people seem to love the females that populate her novels, most notably Harriet Vance, and Sayers herself says all sorts of fantastically eloquent things, some of which come through in this volume.

Some time ago, I wrote a post On Marketable Skills in which I stated that I am sick of statements like, "Get a real job"or "Maybe you should major in something useful" because I don't really see the point in someone who really loves and wants to do art history somehow trying to force herself into becoming an engineer because that's where the money and jobs are.  In many ways, that whole way of thinking has led us to our current financial crisis, as all sorts of genius physics and math majors decided to become hedge fund managers and acted as though financial markets are rational and can be forced to fit models and rules, which is false.  So... if you want to be an art historian, I really don't think you should be forced into being an engineer.  (That said, it may be hard for you to be an art historian, too, but hopefully you can find a job that incorporates your love of art or history into it, if possible.)

What, you may ask, does this have to do with women and the question of their humanity?  Well, Sayers says the same thing, expect in light of women's roles.  She isn't a feminist, exactly.  She says people should be respected and lauded for their individuality and not for their ability to fit into a large, generalist group.  And so she argues that the feminist movement, applied indiscriminately to all women to behave a certain way has really hurt women.  Which I would agree with- how many women now do not want to label themselves as "feminists" because they dislike the baggage and associations that are associated with the word?  So many of us now feel guilty or wrong for wanting to stay at home and be mother or homemaker, even if that really is where our skills lie.  As Mary McDermott Shideler says in her introduction, "The stereotype, 'Woman's place is in the home,' was for a long time applied so indiscriminately that the inevitable reaction, while liberating many women from totally unsuitable employment in homes, has robbed many whose natural place is there of the dignity and joy they should have in doing the job that is right for them."

Sayers also goes into really great detail about the whole phrase "A woman's place is the home."  She points out that when the phrase was originally coined, women had a lot of work to do in the home- they did the accounts, they cooked and canned and cured, they cleaned, the managed large households, they spun and wove and dyed, distilled and brewed and dispensed.  They were midwives and horticulturalists; they knew herb lore and so much more.  So, having the designation of being in the home was really a very busy and full and impressive role to play.


Here are the women's jobs- and what has become of hem?They are all being handled by men.  It is all very well to say that woman's place is the home- but modern civilization has taken all these pleasant and profitable activities out of the home, where the women looked after them, and handed them over to big industry, to be directed and organized by men at the head of large factories...The fact remains that the home contains much less of interesting activity than it used to contain...It is perfectly idiotic to take away women's traditional occupations and then complain because she looks for new ones.

This same argument was used by Gail Collins in America's Women, and it really stuck with me, particularly the section about how (male) doctors went after midwives, and now most women give birth in the very impersonal and cold hospital environment instead of in the comfort of their own homes.  It was great to see that point reinforced here- that, originally, when women were occupied "in the home," they had far more to occupy them and were not just trophy wives to sit and do nothing.

Another scenario that Sayers mentioned really struck me in relation to Jane Austen.  Sayers said that a man once complimented her on her ability "to write such natural conversation between men when they were by themselves."  This struck me because Austen's critics point out that she never wrote a conversation between only men- every conversation she ever wrote had a woman present, and this is apparently a sign of inferiority as a writer because she clearly didn't know enough about men to write scenes of only them.  Sayers' response to the "compliment" was to say that she wrote men in conversation together by assuming that they were human beings and had human conversations much like women would.  And I think Austen's response to that sort of criticism would be along the same vein - why does one have to write according to your rules to be deemed a success?  And why have such gender-based rules in the first place?

Sayers' last point, and the one conveyed with real wit and humor, was that women are constantly judged according to their femininity, and all their decisions are taken because they are female, whereas men are judged and make decisions based first on the fact that they are human, and then only secondarily on the fact that they are men.  It is a very long and excellent section of the book, so I'll just share one last quote with you to give you a sense of it:


Probably no man has ever troubled to imagine how strange his life would appear to himself if he were unrelentingly assessed in terms of his maleness; if everything he wore, said or did had to be justified by reference to female approval...If from school and lecture room, Press and pulpit, he heard the persistent outpouring of a shrill and scolding voice, bidding him to remember his biological function.  If he were vexed by continual advice on...how to be learned without losing his masculine appeal, how to combine chemical research with seduction, how to play bridge without incurring the suspicion of impotence...His newspaper would assist him with a "Men's Corner," telling him how, by the expenditure of a good deal of money and a couple of hours a day, he could attract the girls and retain his wife's affection; and when he had succeeded in capturing a mate, his name would be taken from him, and society would present him with a special title to proclaim his achievement...

I thoroughly enjoyed these essays and the point that Sayers makes in them- if men are not constantly being evaluated as a whole based on their gender, then why are women all lumped together in that manner?  It's an excellent and very valid point to make, and I am glad that Sayers gave me that food for thought.
Musings by Aarti at 8:00 AM