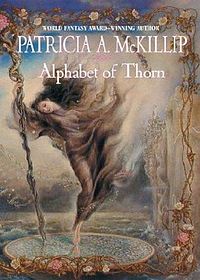 I've been lucky recently to read several new-to-me authors that I've really enjoyed.  Kage Baker, Christopher Fowler and now Patricia McKillip.  This makes me happy because, obviously, it is always nice to discover a book that speaks to you.  This happiness is always somewhat tempered with the, "What else is out there that I have not yet discovered, and what if I never discover it?!" panic.  But I try to ignore that panic as much as possible and focus on the good.

I have had Patricia McKillip on my shelf for a long time and never read her.  This book, Alphabet of Thorn, in particular, has been on my shelf for a while and I never bothered to pick it up.  I freely admit that this is because I really dislike the cover.  It is pretty and very ornate- continuing onto the back of the book as well- but it doesn't really draw me in (though it is amazing at depicting the story itself, now that I look at it more closely).  So I ignored the book until very recently when I felt a pull to read some traditional fantasy.  And this book was SO GOOD.  Thank goodness I got over my cover issues because the story is really fantastic.

Nepenthe is an orphan in the kingdom of Raine.  She was raised by librarians to become a very skilled translator and spends her days decoding very old texts in long-forgotten languages and translating them into her own language.  One day, she meets Bourne, a student at the Mage School, and he gives her a book written in an alphabet of thorns.  Nepenthe is immediately drawn to the ancient book and becomes obsessed with translating it, learning all about the emperor Axis and his mysterious sorceress Kane.  But the book doesn't follow any of the rules - it refers to places and conquests and people that existed long after the author and its main characters could possibly have lived.  And there are problems in Raine, too- the new, young queen Tessera is facing dissent from within her own kingdom, but a more terrifying, completely unknown threat is coming, too.  And the only warning is to "Beware the thorns."

I realize the book sounds really not that exciting in my poor attempt at a plot summary above, but IGNORE the plot summary.  Really, this book is all about the book within the book (I love books about books!) and how that story and its characters impact everyone else and all the action.  Axis and Kane's lives are revealed, little by little, throughout the story until readers begin to understand just how intimately their lives influence those of Nepenthe, Tessera and all their friends.  In a way, it reminded me of The Blind Assassin, but that's really only because both books have stories that not only are fascinating to read, but also reveal so much about the other people that populate the narrative.

Another aspect of this book that was the source of much of my love was the faint hint of feminism.  Not so much to blast you over the head with a "Girls rule!  Boys drool!" approach, but enough to make you take notice.  For example, the great sorceress Kane has gone down in 3,000 years of history as a man, not a woman, and it's only as Nepenthe begins translating that she realizes that Kane is a very powerful sorceress, not a sorcerer.  And she's not the only historical figure that people assume is a man based on the accomplishments that have trickled down through history; it is a theme that comes up multiple times.  Similarly, there is the idea of women having the right to choose their destiny- to face their fears and their problems and decide the proper course of action.  The women in this novel are not bystanders or inactive participants; they move their lives along certain paths and deal with the consequences of those decisions.  I loved that.

I also loved that, much like Kage Baker did, McKillip just very easily makes the people in this book a very diverse bunch.  Unlike Baker, McKillip doesn't make race an important distinction in her novel; rather, people come in all different shapes and sizes and colors and with varying degrees of magical ability, and no one seems to care much at all.  It's quite liberating to see such a diverse and open-minded world.

But what kept me reading straight through for hours on end was the book.  And the book within the book.  Can you even imagine an alphabet of thorns?  Also mentioned are the languages of fish and birds and the winds and so many more.  I would love to see how these languages come through onto paper.  I had a lot of fun trying to visualize them, but they seem completely foreign in construction to anything available to my mind.  And the world that McKillip creates- a huge castle on the edge of the world, so high up on a cliff that you can't even hear the water crashing below, a magical wood that reveals different things to different people, a school that can float in the air, and a rich diversity of characters with a long and storied history.  It was wonderful to soak all of that in, especially since the book is written in such lovely language.  In many ways, this novel reads like a fairy tale.  It's so evocative of magic and romance and destiny, all written in such a manner that you can feel the multiple layers of the world you're visiting, but can't quite see them.  It was just what I wanted, and I'm so thrilled to have discovered McKillip.  I can't wait to read more!
Musings by Aarti at 8:00 AM