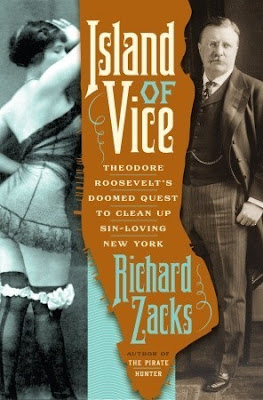 Island of Vice:  Theodore Roosevelt's Doomed Quest to Clean Up Sin-Loving New York is one of those non-fiction books with very eye-catching, scandal-promising titles that hopes to lure you in with the promise of sex and sin.  There's a little sex and sin and scandal, but mostly this book is about Teddy Roosevelt himself and his rise from Police Commissioner of New York City to President of the United States.

The vast majority of the book, though, is about his time as police commissioner.

Theodore Roosevelt is the favorite president of many of my friends.  He led quite a storied life- not only was he an East Coast blueblood, but he also had a ranch out west where he bucked broncos, he was a hero in the Spanish-American war, and he established our system of national parks.  He also was very emotional and passionate, easy to anger.  As the Washington Post once said, "He slays a hippopotamus or cracks a flea with the same overwhelming ardor."

When people write about Roosevelt, they often brush over or idealize his stint as police commissioner.  But, as this book details (in great detail), Roosevelt faced a lot of criticism in his time as commissioner and set up a lot of backs of both his Republican party and the very corrupt Democratic party.  His efforts make the police force strong and get rid of corruption shook a lot of things up, and his determination to enforce all laws - particularly the law banning the sale of alcohol on Sundays - made him very unpopular in the city.

It took me several weeks to read this book.  This got very frustrating at times because I was reading it at the same time that I was reading Middlemarch, and it's tough to read two such long and detailed books that require serious concentration at the same time.  Besides that, the book also goes into a great many details about forgotten trials and scandals of the time.  When I picked the book up, I was hoping for more social history and commentary - for example, why did New York have so many brothels and bars, and how did the system work?  I wanted stories about some of the prostitutes, I wanted to learn about the "immoral dancers" and the gentlemen who requested their services.  I wanted to know about the life of a barman.  I didn't get much of that, really- or at least, not much below the surface.  Instead, I got a lot of information on the state of the New York City police force in the 1880s.  It was very interesting information, for the most part, but not what I really wanted.

There was an interesting/horrifying section on antisemitism.  One of Roosevelt's challenges while serving on the police board was to prepare for and protect a virulently antisemitic German Parliament member, Herr Hermann, on his visit and speech in New York.  The US was also in the midst of an antisemitic wave and many prominent people, including Joseph Pulitzer, kept their religion secret so as not to invite comment or criticism.  Pulitzer was so good at this that his own son didn't know he was a Jew until he was a teenager.  There were many quotes shared in the book from leading and widely-read publications of the time that are quite disturbing, so I was a little relieved to find that Herr Hermann was not received well in New York at all.  But it's hard to read about antisemitism in the late 19th century and not dread what will come about from it only a generation later.

Overall, I enjoyed learning more about Theodore Roosevelt in this book, though he isn't portrayed in a universally positive light.  He had Opinions, and he shared those opinions, and he was very public about some things that he probably shouldn't have been.  It's amazing, really, that he managed to become such a successful politician, considering how many people he angered.  What's also amazing is how he stuck to his guns in the midst of so much opposition.  He went after very well-connected criminals, celebrated police officers and commoners off the street.  He stayed strictly unbiased in his appointments, never choosing someone for a position just because he was a Republican (this got him into a lot of trouble later).  He was clearly a very tenacious and driven man, and I can see how his ambition took him so far in life.  It was interesting to read about this period of his life because he was clearly very unhappy in his role and what he was being asked to do, but felt honor-bound to do it.  I think I'd prefer to read about his days as a Rough Rider, though, or on his many trips West and his drive to create the national parks.  Those are the accomplishments that Roosevelt is known for and that he is most proud of, and it would be interesting to see if his personality (which at times was very whiny in his time as a police commissioner) comes across as happier and easier to like in periods when he is enjoying his work.
Musings by Aarti at 1:30 AM