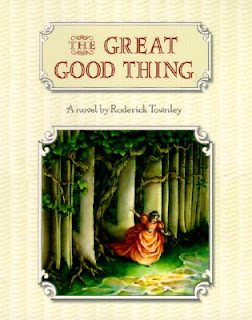 "I have everything, but I have done nothing.  Before I marry, I must do one Great Good Thing."

Roderick Townley's children's novel The Great Good Thing is one of those most magical of books- a story within a story.  A metastory, if you will.  Princess Sylvie lives within the pages of a book called The Great Good Thing.  The book hasn't seen much action lately, so the characters really just sit around doing whatever they want (exploring the forest, taking lute lessons, inventing puns, traveling to other pages) until they receive warning that a reader is opening the book.  Then they jump to the first page, breathlessly recite their lines and complete their designated actions, and go through the story one more time.

After a long lull of inactivity, The Great Good Thing is opened by a young girl named Claire, who becomes enraptured with the story.  Similarly, Sylvie becomes more and more interested in Claire the Reader, even going so far as to enter Claire's dreams.  As Claire grows into a young and then an old woman, Sylvie's role in her life shifts and ebbs.  But how long can a storybook character survive if there is no one left that remembers the story? 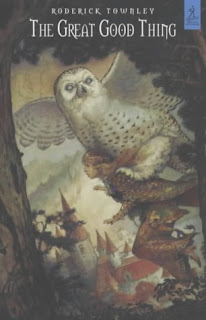 This book was a very quick read, but it was really very heart-warming and reached unexpected depths.  I didn't expect much from it because the only other book I read by Townley was not that great.  But I have had this one on my shelf for a while, and its premise is so interesting, that I just grabbed it and read it within the course of about 1.5 hours.

I really love books about books.  This one takes it a step further, really, and makes the whole book about the characters in another book and what happens to them when people stop reading their story.  In that way, it reminded me a bit of Toy Story 3.  It has the same sense of camaraderie among the characters, the same seemingly-light but really quite powerful existential crisis, and the small but important glimpses into the Real World.

We don't ever get to know Claire very well in this book, but what we do find out about her worries us.  She was a lonely child with a bully for a brother and parents who lived far away.  She was raised by her grandmother.  She is plagued by recurring nightmares about all sorts of things, from people kidnapping her grandmother to fires engulfing her homes to avalanches of letters demanding payment of overdue bills.  She grows up to lead a generally happy life, but there is always the slight threat of her brother and her creditors looming over her.

Sylvie, on the other hand, we know very well.  She feels constricted by the part she plays in the story- always the same adventures, always the same lines, always the same people.  She loves her family and friends but longs to escape.  But when she finally does, she realizes that there is a lot more at stake than just her own happiness.  What I liked so much about Sylvie's story was that, even though this is a children's book, the characters are all presented realistically, with flaws.  Sylvie's father, for example, is a kind king, but he lets people walk all over him.  Her mother is frightened of change and does not adjust to life outside of a storybook well.  I think that often in children's literature, people are presented as either all good or all bad, and I love that Townley showed his characters to be much more nuanced.  I so appreciated the fact that Sylvie knew her parents had flaws but loved them, anyway, for their good qualities.

And what makes this story so powerful to a book lover is the way Townley so accurately captures the relationship between an author, the characters and a reader.  When I love a book, I often go back to my favorite scenes and reread them again and again, even if I don't read the rest of the book.  I sometimes feel such a connection to the characters that I imagine what their lives will be after the last page.  I insert them into my life or insert myself into their lives and wonder what a conversation between us would be like.  I mull to myself what an awesome person the author must be, and how I would so love to meet him or her.  If I see a copy of a beloved story sitting neglected on a bookshelf at the library or a bookstore, I feel ridiculously sad for the book and will sometimes sneakily put it into a more prominent spot.  It's such an emotionally intense and personal experience to encounter a book that you really love, especially when you're young and the story becomes an integral part of your life.  And Townley captures that experience so well here, in such a short book.  It's lovely, and I'm so glad that I picked it up.
Musings by Aarti at 1:00 AM