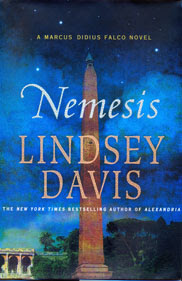 Well, I've made it to the end of this particular road that leads to Rome.  Nemesis, by Lindsey Davis, is the twentieth, and very likely the very last, book in her very popular Marcus Didius Falco historical mystery series.  And it ends quite satisfyingly, too.

Falco and family are back in Rome, dealing with significant family crises.  To take his mind off things, Falco accepts a job to find a terrifying mob-like family of former Imperial slaves that now lives in the provinces and find a way to pin many missing persons reports and murders to them so that they can finally be brought to justice.  But this mission is more dangerous than any of Falco's previous ones, and it stretches his own moral code further than is comfortable for many people.  The case also puts him straight in the path of his most hated enemy, Anacrites, and this time Falco is determined to get payback for all that the Chief Spy has made him suffer before.

I love this series.  I feel so bittersweet about coming to the end of it, but I am really quite happy that Davis has taken her attention away from Falco for a while.  I think she was getting tired of the series, and the past several books haven't been nearly as good as the first several in the series.  But this book was truly excellent.  It's hard to say goodbye to some of my favorite characters, but I am happy knowing that they are well-situated, taken care of, and likely to live very fun lives with a lot of humorous moments, even after I leave them.

This book is very dark.  Falco is now firmly in the middle-class (upper middle-class, even).  He is getting into his late 30s.  He has children and in-laws and sisters and a wife all making demands upon him and his time, and he feels a passionate need to keep them all safe and warm.  But for the first time, really, we see moral ambiguity in Falco and Petronius.  As heads of families, they are willing to do a lot to keep themselves and their loved ones safe, sometimes to such an extent that it makes Helena Justina, Falco's wonderful wife, very upset.  There is so much history and trust and kindness in these strong friendships that Falco has formed over the past twenty books; it is really a treat as a reader to see how those bonds can bend and twist and then come back into shape again, which each side learning more about the other.

We learn so much more about the mysterious and creepy Anacrites in this novel, too.  Much more about his background and family and insinuative ways.  Falco and Helena's adopted British daughter, Albia, really shines in this novel, too.  She realizes that she'll never be the same as a true Roman, but wants to do her part to help the family that has been kind to her.  She's strong and fun and I think she'd be an excellent center character for another series of mysteries, if Davis was so inclined...

And through it all, there are the jokes and asides and sarcasm that made all us readers fall in love with Marcus Didius Falco in the first place.  I will miss spending time with him and his family.  But this book was such a beautiful wrap-up.  I loved the way it came full circle at the end, with Marcus going back to his tiny, cheap apartment on the sixth floor of a rickety apartment building in Fountain Court and remembering how his life used to be- I remembered along with him, and marveled at all that had happened to him since then.  And then the series ends, as it began, with Marcus and Petronius re-cementing a friendship that has already been through so much.

A wonderful end to a wonderful series.  I look forward to reading Davis' stand-alone novels and now immersing myself in another series of historical mysteries.  Any suggestions?
Musings by Aarti at 11:30 PM