Musings: A Kid for Two Farthings 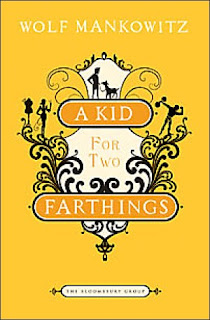 A Kid for Two Farthings is a very short, light read that actually has not been sitting my shelf for long at all- only about a week.  I picked it up because I am currently in the early stages of my epic buddy read of Middlemarch with Heather, and really need some shorter, lighter books to make me feel like an accomplished reader while I get through Eliot's 1,000+ page tome on the Kindle.

I suppose picking a book up solely because of its slimness is not a very auspicious start, but I was excited for this read.  I really liked the other Bloomsbury Group book I read, Mrs. Ames, and I adore the covers of all the books, so even if I don't like the stories, I admit I would keep the books solely for their covers.  What can I say, we all need a little prettiness in our lives.

Anyway, to the book!  A Kid for Two Farthings is narrated by Joe, a six-year-old living in London's Fashion Lane in the early 1950s.  His father has gone off to South Africa to make a fortune, leaving Joe and his mom in a pretty poor area of London.  Luckily, Joe has Mr. Kadinsky, the tailor, for company, and spends most of his days in the workshop with the tailor and his employee, Schmule, who is also training to be a wrestler so that he can buy his fiancee an engagement ring.  One day, Mr. Kadinsky tells Joe about unicorns and their ability to grant wishes.  Joe immediately wants a unicorn and goes to the market to buy one- he comes home with a stumbling, distorted baby goat with the two horns so close together they look like one tiny bump coming out of his forehead.  Joe is certain that this unicorn, Africana, will solve the problems of all the important people in his life.

Though most of this book is told from the perspective of a child, I wouldn't call it a children's book.  It falls into that gray area that I recently visited with Crow.  Really, this is a novel about working-class London after World War II.  Mr. Kadinsky is struggling to make a living, fighting against large manufacturers for customers.  He is a member of the tailors' union, and many of his colleagues complain about the lack of work.  But Mr. Kadinsky always has time for Joe, and the bond between the two of them is really lovely to see.  Mr. Kadinsky is just so kind and patient, even though his own life is difficult and lonely.

Through Joe's eyes, we see the best and worst of working-class immigrant communities in London.  While so many people are struggling, there is still kindness and neighborliness everywhere, and six-year-old Joe goes off exploring on his own quite often without anyone ever worrying about the dangers he might face.  One of the most touching encounters Joe has is with an alcoholic vagrant.  The first time Joe sees him, the vagrant has come begging for some scrap material from Mr. Kadinsky, and Joe is terrified of him, thinking he is a villain that has come to steal Joe's beloved unicorn from him.  Later on in the story, Joe follows the vagrant as a reconnaissance mission, to ensure that he can't get his hands on the unicorn.  The chase stops at a cemetery.  It's a very simple scene, with no words or looks or anything exchanged- in fact, the vagrant doesn't see Joe at all, but Joe leaves the cemetery much wiser and more compassionate than he entered it.

This very short novel (novella?) is like a series of vignettes about life in immigrant communities.  I loved the interplay between so many different types of characters- Schmule, who was so obsessed with wrestling but made time to help Joe build a unicorn hut.  Joe's mother, who worked at a milliner's and enjoyed her moments of gossiping with the co-workers, but then came home and cried about her departed husband.  The grocer, who left the store to accompany Joe back to his house to help diagnose Africana's illness.  And always, Mr. Kadinsky, who seems to have never forgotten what it was like to be a child with an imagination.

A Kid for Two Farthings wasn't a mind-blowing book.  I have a feeling that in just a few weeks, I will forget a lot about it and how the story progressed.  But it was a sweet book that really shed light on the sense of community that used to exist between people, and really brings to life the whole "It takes a village" philosophy.  And it has a pretty great cover, too :-)

Note:  Apparently this book was also made into a movie!  I have a feeling it will be difficult to find, but I'll keep you updated if I can watch it.
Musings by Aarti at 11:30 PM