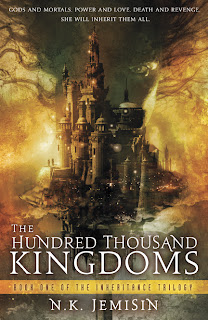 N.K. Jemison's The Hundred Thousand Kingdoms is the first book in her Inheritance Trilogy.  It revolves around Yeine, a young woman from the remote region of Darre who is summoned to court by her grandfather, the reigning ruler.  Yeine's mother had been an Arameri before she left the castle to marry Yeine's father, one of a very select group of people with the power to unleash the gods, and now Yeine must learn navigate the very complicated (and often sadistic) politics of the Arameri court, a task made more difficult by the fact that she has agreed to help the Enefadeh, the gods currently under Arameri control.  But who can trust a god, especially a group of them who hold onto thousands of years of resentment and anger?  Yeine must juggle these difficulties and more, hoping to save her own life.

This book was released to much fanfare, not least because it's an epic fantasy novel written by an African-American woman.  If you read epic fantasy at all, you know how very rarely that happens.  The book isn't written in some sort of revisionist structure, which seems to be the fear that many fans of epic fantasy have when the discussion around diversity in the genre arises.  "But the genre is based in Medieval Europe," they say.  "Having people of other races in that setting would just be jolting."  Or my personal favorite, 'If you want a fantasy book about X region/ethnicity/history written, then you should write it yourself."  Fascinating how people don't realize just how bigoted statements like that are, but I realize that on this page, I am probably preaching to the choir.

So, to my point- Jemison didn't base this epic fantasy on Medieval Europe exactly, but she also didn't make it so overtly "African-American" in scope that epic fans wouldn't recognize their beloved genre in the book.  She just made the characters more diverse.  And for that, I thank her.  She did it and got nominated for a Nebula award.  So there.

But it's unfair to review a book in a racial vacuum.  I love that N.K. Jemison is not a WASP male, but still became interested in epic fantasy.  I love that she continued to read the genre, even though people who looked like her were almost always portrayed as "the Other."  I love that she then felt compelled to write a book in this genre, and that she populated that book with a very rich and diverse cast of characters that have many different backgrounds and shapes and sizes and colors.

"You wouldn't have had to kill me," I said softly.  I ducked my head and looked up at him through my lashes, curving my body in silent invitation.  I had seen prettier women do this all my life, yet never dared myself.  I lifted a hand and moved it toward his chest...there was a body within the shadows, startling in its solidity.  I could not see it, or my own hand where I touched him, but I could feel skin, smooth and cool beneath my fingertips.  Bare skin.  Gods.

Gods is right.  Ugh, really?  What is it with female characters in literature and the "prettier women" phrase?  It's always "prettier women did x but I never did."  Sometimes they will substitute the word "bolder" for prettier, but it really comes down to the same thing.  "A lot of other women do this, but it's really forward and bold and makes me seem like more of an object than the intelligent and resourceful woman that I really am, so rest assured, dear reader, that I only act that way in very specific and extenuating circumstances."  And those specific circumstances are almost always ones that involve some sort of seduction of a man.  It's never "I had seen prettier women than me change their own flat tires my whole life, yet never dared myself."  Apparently, pretty women never do anything useful, they just use their skills in an attempt to seduce gods.  Because they're pretty, this is allowed.  But if you're a girl and are not so pretty, well then... you're just stepping out of your boundaries.

I don't mean that the above paragraph ruined the book for me, though there were many written in similar veins about the romance between Yeine and Nahadoth.  It was also just that I didn't understand the set-up of the book.  Granted, I took two weeks off from reading it right in the middle because I wanted to read A Dance with Dragons.  But even so, I think the book was muddled in its set-up and execution.  It seems like every mortal person is somehow capable of also housing the soul of a dead god within him.  And the whole "absolute power corrupts absolutely" motif was done to such extremism here that I got tired of it (again, this reaction was probably in large part magnified because A Dance with Dragons also had a lot of sadism in it).  There are a lot of characters here that have the potential for brilliant gray areas, who made difficult choices for the sake of family or power or peace.  But we don't get to know them much at all, and so instead just get an impression of them all being evil.

I think what saved this book from being a DNF for me was the narrative voice.  Yeine was an interesting narrator, often stepping outside herself to tell the story, share asides and give some history.  I thought she was really engaging and enjoyed her story-telling, but the story itself didn't do much for me.
Musings by Aarti at 11:29 AM