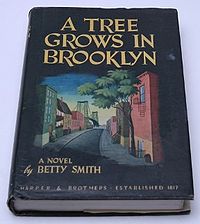 Ohmigoodness, why have I missed out on this book for so long?  I started the year completely mesmerized by another modern classic, Cry, the Beloved Country, and now I am once again in awe.  A Tree Grows in Brooklyn is definitely one of my top reads this year.  I highly recommend it to anyone who likes reading.  Specifically?  To anyone who enjoys reading good books.  (With beautiful covers, such as the one pictured to the left here, the cover of the first edition)

A Tree Grows in Brooklyn is mostly the story of Francie Nolan, but also the story of anyone growing up poor in early 20th century Brooklyn.  Francie's parents married young and had children before they were ready, driving her father to alcoholism due to the pressure of family life and her mother to take up the reins of being the head of household.  Her mother (Katie) works very, very hard so that Francie and her brother Neely can attend school for as long as possible and hopefully never be forced to leave school and work instead.  Francie loves school and in the seventeen years we spend with her, she holds fast to her dream of becoming a writer- a writer who speaks the truth and shows that poverty is not ugly, and that life is more like ocean waves, ebbing and flowing, than a straight line set out for you right at the start.

Every character in this book is so nuanced and so richly portrayed.  Francie's father, Johnny, is a man who crumbles under the weight of his obligations.  He doesn't work consistently, and he spends a lot of what he earns on alcohol.  But he also has a beautiful singing voice, knows just what to say, and instills in his children a sense of pride and honor.  He was one of my favorite characters and, like Francie, while I mourned what he could have been, I loved him just as he was, too.

Francie's mother Katie was another fantastic character.  From the beginning, it's established that she prefers Neely to Francie, and so we see their relationship develop over time, always with that tension there.  Katie is the way I imagine many poor women of the era to have been- the backbone of the family who held everything together and instilled faith in everyone that things would turn out alright, even if she herself didn't believe it.  One of my favorite things about Katie was her ability to splurge once in a while.  She saved so much and worried constantly about money, but, for example, she let Francie throw away a cup of coffee every day because she wanted her daughter to know one small part of being rich, of having more than necessary and availing herself of the luxury to throw things away. 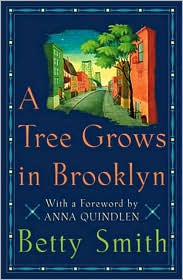 Every character in this book is lovely, but I have a special place in my heart for Francie.  She is like the much more realistic and pragmatic Anne Shirley who grew up in poverty, saw ugliness, created beauty and made the best of every situation.  And loved writing.  The episodic nature of this book reminded me of. To Kill a Mockingbird.  Both books deal with really heavy and important topics (race in that case, poverty in this one), but do so through the eyes of children that you fall completely in love with.

But don't let my comparing this book and the characters that populate it to others like it mislead you- A Tree Grows in Brooklyn owns its territory and succeeds completely.  Francie is a sweet, kind child who grows up learning that lies can be useful, teachers aren't always right, and boys can break your heart.  She is not a commanding person, really, but she is a commanding presence in this book that captures an era and place so deftly.  It's a beautiful story with excellent characters, and it pulled me in completely.  I loved this book, I loved Francie, and I loved the beginning, middle and ending.  Highly recommended.
Musings by Aarti at 11:17 PM