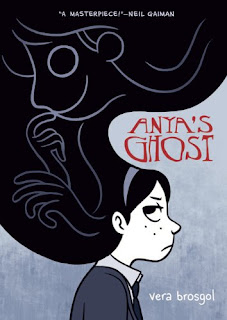 Anya’s Ghost, by Vera Brosgal, is a graphic novel about a teenaged Russian immigrant to the US who falls into a well, finds a ghost, and makes a friend.  Anya moved to the US with her mother and younger brother when she was five years old and has expended a lot of energy changing her accent, updating her wardrobe and losing weight so that she can fit in with her classmates.  But she doesn’t feel like she fits in at all- she only has one friend, Siobhan, and she can be pretty mean.  She struggles in class and feels like a complete outsider.  One day, going through a park, she falls into a well and meets Emily, the ghost of a girl who died about ninety years before.  Emily comes out of the well with Anya and helps her gain confidence in dealing with the difficulties of high school.  But soon, Emily is insisting a bit too much on the way Anya’s life should be led, and Anya must decide whether she wants to keep Emily as one of her few friends or let her go.

This book has been reviewed on many blogs that I’ve read over the past several months, and so when I had some time to spare at a bookstore recently, I picked it right up.  It helped that on the cover, there’s an endorsement by Neil Gaiman calling the book “A masterpiece!”  (Though in my opinion, it seems like Neil Gaiman endorses a lot of books.)  In this case, I would agree with him.  While I don’t think Anya’s Ghost was a masterpiece, it was a really great story about a girl coming into her own and realizing she’s worth more than she thinks. 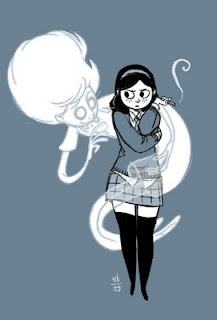 In a way, I guess this is a pretty typical story.  A girl feels very self-conscious and alone in the world, and is very defensive and confrontational because of it.  And then something happens- some catalyst action or person- that makes the girl realize that she has value and can make good choices, too.  But just because this is a typical coming-of-age story arc, that doesn’t mean that it can’t be done well.  And I think Brosgal succeeds.

In a way, this story reminded me of a book I read when I was much younger and don’t even recall that well any more, Wait Till Helen Comes.  In that book, too, a girl encounters a ghost who encroaches on her life in more and more disturbing ways.  Emily was an excellently written character.  I loved how the graphic representation of her evolved over the course of the book.  She started as a timid, dowdily portrayed ghost, and then became more defined and svelte as the book continued and she experienced more of the world.  Comparing her to Anya, who had such expressive features, was one of my favorite things about the drawings in this book. 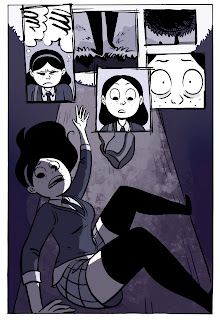 What I like most about Anya is that she knows from the start that she has value.  She is confident enough to know when a gorgeous, athletic guy who expresses interest in her is actually not a good person at all.  She also feels sorry for the beautiful, kind girl that is dating the guy because she’s so worried about her image.  Anya wants friends, but she knows better than to put herself down in order to gain them.  I also like that this book addresses a lot of the difficulties of being a teenager, but doesn’t try to solve everything.  Anya struggles with her weight, is uncomfortable with her body, isn’t interested in school and feels like an outcast.  Brosgal acknowledges all of these things, but she really focuses her story on Anya showing the confidence to be her own person, especially in her final confrontation with Emily.  I really appreciated that.  I think the simple color scheme- all in varying shades of grayscale- really helps to project this, too.  Anya’s face is full of expression, as is her body stance.  You can tell what she’s feeling even without reading the words.

I enjoyed this book a lot, and I’m glad I was able to read it so quickly as it’s been a very long time since I’ve read a graphic novel!  Recommended for fans of YA fiction.
Musings by Aarti at 11:12 PM