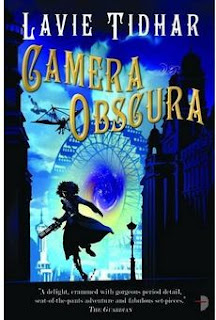 Lavie Tidhar's Camera Obscura is the second book in a series that started with The Bookman.  I did not read The Bookman, however, and did not find it difficult to understand Camera Obscura at all- it takes place in a different country, with an entirely new set of characters, and while it probably mentions some characters from the previous volume in passing, it is not done in any fashion that impedes your understanding of this book.

That said, I don't really think I understood this book at all.  There is a Milady, an agent for the Quiet Council, a group of automatons that has been in charge of France since the Quiet Revolution.  The Quiet Council has set Milady the task of finding an object that was stolen during a gruesome locked-room murder, an object that appears capable of taking over people's bodies and causing them to do strange things.  Concurrent to this is the secondary story of Kai, a young Southeast Asian who gets his hands on a jade statue that everyone in the whole world seems to want.  The two stories converge only near the end, though they reference each other throughout.


I really don't think I can confidently say what this book was about.  Like many steampunk novels, it centers around something that could potentially destroy the world, but I don't think this thing was properly explained, and the ending was so rushed that I can't say that I have any real idea of what happened.  There were also so many characters, many of whom lied or double-crossed or switched sides, that I didn't know what was going on.  I honestly finished the book without knowing if the plot was wrapped up or if it was left hanging.  Though I don't know if this is the book's fault, really, as based on other reviews, everyone else understood what was going on and enjoyed the book, but I just was completely lost!

One thing I did enjoy about this one were all the literary references.  They're not so integral that if you don't know your classics, it will impede your enjoyment of the novel, but they are there in a way that if you see them and understand them, it makes you feel as though the author is giving you a sly wink over a secret shared joke.  There are the Dumas references, starting first with the name of the main character, Milady, and continuing with many references to the Three Musketeers.  There's a man in the iron mask, a Gason, a d'Artagon.  That's not all, though.  The Marquis de Sade makes an appearance, as does Mycroft Holmes.  Dr. Moreau of the famed island is mentioned briefly and there is a man named Viktor who does some shady operations.

I also enjoyed the alternative Paris (and Chicago!) that Tidhar created.  There is much hinted at but not explained, much shown but not told.  Tidhar also has an entire world literally at his beck and call.  His first novel took place in England and this one took place in France, but he could go to Asia and the Americas (Vespuccias?) if he wanted, and have really fascinating worlds and alternate histories there.

I liked much of the background and asides of this story, though I am positive that I didn't understand the main plot.  I may well do a Google search for "Camera Obscura spoilers" to see if someone can explain to me exactly what happened.  There was also a lot of violence in this book- quite graphic violence, too, so it's possible I was skimming some pages that detailed exactly what was going on because I didn't want to read about the agony characters were going through.  Definitely an interesting book, but not my favorite.

Note:  I received an e-book of this novel to review.
Musings by Aarti at 11:07 PM