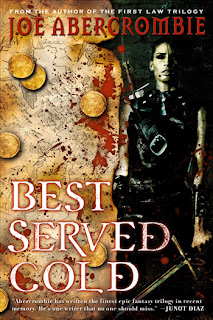 Joe Abercrombie's Best Served Cold is a (very long) novel about, unsurprisingly, revenge.  It is a stand-alone book set in the same world as his First Law Trilogy that I read about a year ago.  One of my best friends gave me the book to borrow an unconscionably long time ago, and I never had the nerve to pick it up.  I wasn't ready for 600+ pages of massive hardcover in Joe Abercrombie's signature style, which is comprised of brutality, cynicism and a lot of regret.

I finally picked the book up and read through it almost without pause.  If you want to read this book, I would avoid this method because it is depressing.

Like pretty much every story about revenge, it starts with the Perceived Wrong.  Monza and her brother, Benna, are the generals of the largest mercenary force in the known world.  They're also very popular with the people- too popular for the grand duke's liking.  So one day, the king and six other people kill Monza's brother and attempt to kill Monza.  But she survives, with some severe physical scars (and a whole lotta Emotional Baggage), and vows revenge on all of them for doing such a dastardly, undeserved deed.

To accomplish this, she assembles a motley crew:  Shivers, a Northman who wants to turn over a new leaf and be a good man; Friendly, an obsessive-compulsive, highly efficient killer; Morveer and his assistant Day, two highly-skilled poisoners; and a few others, my favorite being the charismatic Nicomo Cosca, Monza's old boss.  Lured by promises of large payments, these people all agree to join Monza on her quest for vengeance.  And, as in most stories about revenge, things don't end quite as well as Monza hoped.

My favorite story about revenge is The Count of Monte Cristo.  In that story, the victim really does serve it cold, waiting years to come back and spin his web that traps all wrong-doers and pays them back with plenty of interest for all his suffering at their behests.  In that highly romanticized world, nothing goes wrong for him and things end up pretty much exactly the way he wants them to, and he lives happily, vindictively, ever after.

No such luck for Monza.  She is plagued by unexpected turns, plans gone awry, double-crossings and inconvenient deaths.  Nothing turns out as she expected but, like so many characters through literature starting with Oedipus, her actions lead her down the road of fulfilling the destiny everyone at the beginning thought she was after in the first place.

The characters in this book are fascinating.  I loved Shivers from the first page he appeared, a massive warrior bumbling about in a foreign country, trying to fit in and make friends and do good for himself and having a miserable time succeeding at it.  I also enjoyed the glimpses of humanity we had into Morveer the poisoner and Shenkt the assassin.  Poor Morveer who really was just an insecure man that wanted to fit in and never did.  I adored the obsessive compulsive Friendly and his confusion with the workings of his world- I loved every conversation (or lack thereof) that occurred between him and Nicomo Cosca.  And Cosca himself- bigger than life, hilarious- completely won me over.  Monza- I don't know how I felt about her. She was so aloof, so hard and so damaged that I don't think anyone could really love her.  She had a great (and somewhat creepy) relationship with her brother, whom she loved more than anyone but as we come to know through masterful peelings of layers throughout the story, that sibling relationship wasn't all sunshine and rainbows.

Abercrombie also has one of the greatest gifts for bleak, dark, murderous humor that I've ever seen.  There are laugh-out-loud funny exchanges between characters throughout the story, even in its bleakest moments.  I say bleakest, because every moment in this book is at least a little bleak.

And I think that is why I didn't love this book.  While The First Law Trilogy took me through the wringer and made me question whether any goodness in humanity exists, there were still pockets of kindness and goodness in the characters that they were willing to show- glimpses into happy moments and true friendships.

There is none of that in this book.  Monza's single-minded quest for revenge, her anger at her own injuries, her inability to connect with people on a personal level and the complete lack of trust she has for anyone corrupt everyone around her.  There's no moment of redemption, no feeling that karma exists and that in the end, good acts lead to good lives.  That idealism is brutally torn from the readers' hands, and about 2/3rds of the way into this book, I got tired and depressed myself, just reading it.  It's hard to take.  No wonder it took me a full year to pick up another book by this author- he doesn't let you off the hook for a minute!

So while I think the plot is extremely well-written, the characters fascinating and the humor excellent, I can't say that I am sad to have closed this book.  It was wonderful to get up this morning to a sunny sky, smiles from friends, and a happily secure feeling that (as far as I know), no one in the world hates me enough that she'll threaten the global power balance just to kill me.  Thank you, Joe Abercrombie, for reminding me to be grateful for the little things in life.
Musings by Aarti at 11:12 PM