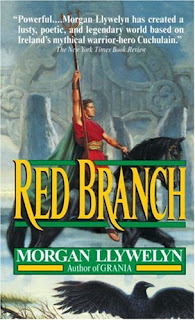 There are some books that stand out to you on the shelf one day, and you have no idea why.  What is it about a book that can make it sit patiently on your shelf for years before finally your eyes glance at it and decide it's the one you want to read next?  Often, I don't know.  In this case, though, I know exactly why I picked this book up!

While reading Hawk of May, I noticed many allusions to a mythological Irish hero, Cuchulain and the Red Branch warriors.  I remembered that I had a book called Red Branch by Morgan Llywelyn (who is nothing if not Irish) and started browsing my shelves.  Sure enough, there it was on my shelf!  Where it has been waiting for me, according to LibraryThing, since at least 2006.  (I only opened my LibraryThing account in 2006, though, so maybe it has been on the shelf even longer...)  So I finally picked it up to learn more about a group of warriors who were mythical even in King Arthur's time.

Red Branch is a book that I think would appeal very much to a teenage boy.  It is populated by flawed, bigger-than-life, hard-drinking men who fight together and form a very tight bond that cannot be broken by any mere woman.  The main larger-than-life character is Cuchulain, born with uncertain parentage and taken under the wing of his uncle Conor, king of Ulster.  He joys the Boys' Troop, learning warfare from a former king and excelling in everything.  But there are times when he gets angry or frightened, and then the Rage comes upon him and he's like a magical, mythical being of pure vengeance, terrifying (and killing) anyone in his path.  But Cuchulain doesn't want to be remembered for just his battle prowess.  He's also kind to children.  He loves his wife.  He is honorable.  But what's come down through history is him as Champion.  And the Rage.

But Cuchulain is only the center of a very populated story.  There's also Deirdre, the most beautiful woman in the world, who brings destruction and mayhem wherever she goes.  There's Cuchulain's faithful wife Emer who hides her jealousy, his lover Ayfa who plots revenge.  Maeve, queen of Connaught who wants to expand her empire.  And, most of all, Morrigan, goddess of war.

The story is told very much like a folk tale, so many of the characters aren't fully fleshed out, or are only described in big, vague words like "strong," "jealous" and "drunk."  (I guess that last one isn't so vague!)  Also, since the book is sort of a compilation of many separate folk tales about the same legendary hero, there are some characters that make very brief cameos and then disappear from the book forever.  Some that seem very important at a time, and then fade into the background.  It makes sense to write that way to fit all the stories in, but it's also sad not to see more of a character you've come to like.

I said before, about Hawk of May, that what I love most about books set in this period before the encroachment of Christianity and science in the Western world is the extent that people believed in magic and the Other and the possibility that our world and the Otherworld can and do interact.  I love that.  I love the superstition around different holidays, the personal guards people put up against capricious gods and sly fairies.  I am fascinated by the idea of a ges, a very strict rule about something fairly innocuous (Cuchulain had a ges on him that no one could ever wake him from sleep, but he must always wake up on his own) that can have dire consequences if not followed.  It's so interesting to imagine a life like that, so far removed from our own.

I think that's why I enjoyed this book.  I didn't love the story so much, particularly in the last 100 pages or so which were just filled with war and battle.  But I think Llywelyn does a great job of immersing us in ancient Ireland- the honor, the glory and the magic that existed there thousands of years ago.
Musings by Aarti at 11:07 PM