Musings: Hawk of May 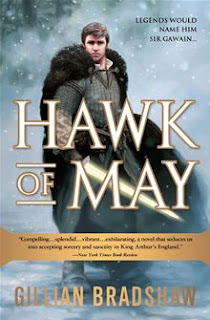 Hawk of May, by Gillian Bradshaw, is the first book in her Down the Long Wind Arthurian trilogy.  It was first published in the 1980s.  My copy is an old mass market paperback and does not have the cover shown to the right- but I was happy to find that the book has been republished after being out of print for so long!

Hawk of May  is the story of Gwlachmai (Gawain), son of Arthur's sister Morgawse and King Lot.  Growing up, he had no skill at the arts of war he was expected to learn.  Instead, he was an excellent horseman and bard.  His father didn't appreciate these arts, though, and thought Gwlachmai useless, giving him none of his time and all of his temper.  So Gwlachmai was led down the path to the Darkness by his sorceress mother, trying to use magic and evil to gain power.  It was only after one particular episode in which Morgawse went too far that Gwachmai was able to pull away from her influence and escape the Darkness that wished to consume him.  His escape and his quest after that to join King Arthur's family make up the majority of this story.

I always wonder what leads me to finally pull a book down off my shelves after it's been waiting there for years.  In this case, after reading The Drawing of the Dark, I realized that I was in a mood for more King Arthur and that I had Bradshaw's trilogy conveniently located on the shelf.  So voila!  Now I have started the series, and I hope I feel motivated enough to read the rest of it soon, too.

I was predisposed to like this book for several reasons but mainly because I love King Arthur and have been on a fantasy binge this year.  And the book didn't disappoint on those counts.  One of the aspects of Arthurian literature I most enjoy is that Arthur symbolizes not just a battle of civilization vs. barbarism or of one race of people trying to keep invaders out.  His era is also that final clash between Old and New in Britain.  It's the rise of Christianity against the old mythology of the British Isles, and every time, I admit, I wish the old gods would win, or at least manage to stick around, because the history and folk lore is so fascinating and rich.  In a weird way, I also love the futility of the Arthur story.  A king who knows what his downfall will be decades before it comes for him.  A man and his followers fighting to the end in what is inevitably a losing battle.  It's a heart-wrenching story, but there is so much beauty and goodness in it, too.

In Gillian Bradshaw's retelling, there is no Merlin (a great disappointment to me as my favorite Arthur retelling remains Mary Stewart's Merlin trilogy).  She bases her story on the original Welsh stories and draws in Irish mythology, too.  It's interesting to see the way she approaches the religious clash as well.  Morgawse symbolizes the Darkness and it seems that all sorcerers practice evil.  Arthur himself is portrayed as a (fairly) devout Christian.  Gwlachmai is not Christian but he is a warrior for the Light, which is a complex combination of Christian belief and his Irish ancestry.  I didn't love this interpretation mainly because I always thought it was Guinevere who was very religious and Arthur who was much more pragmatic.  However, I did like how open Bradshaw was to the Otherworld and the Sidhe and all those other beings that populate Celtic mythology.  I loved that she brought those elements in and made a place for them in her story.  There were some very high-level spiritual conversations in this story that I wasn't expecting to come across and tended to scan over, but if you are in the mood for religious debate, then you will probably enjoy them more than me!

I enjoyed this book.  I loved being immersed in post-Roman Britain once more and seeing the battle between the old ways and the new, fought so clearly in massive battles.  I also really enjoyed Gwlachmai as a narrator.  He's just a really good person.  It was wonderful to get to know him better, particularly as he is one of the most famous knights of the Round Table and has a significant amount of mythology relating to him.  (He also shows up for a cameo in Silverlock.)  He is a very engaging narrator, and seeing him through his personal struggles is a very absorbing way to spend an evening.  I am very glad I finally picked this book up off my shelf, and I look forward to reading the next two in the series, too (Kingdom of Summer and In Winter's Shadow).  Highly recommended for fans of Arthurian fiction!
Musings by Aarti at 11:08 PM