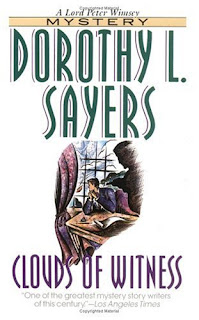 On I continue in my quest to read books that have long been on my shelves but never seem to come down.  This time around, I picked up Dorothy Sayers' Clouds of Witness, book two in the Lord Peter Wimsey series.

That said, I have very little desire to progress further in this series, which is unfortunate as I own I think the first five books in it.  I just don't like Lord Peter, quite frankly.

But let me start with the plot.  Lord Peter returns to England after a nice trip abroad to find news reports of his sister's fiancee murdered and his elder brother, the Duke of Denver, in jail as the accused.  He is obviously more than a little perturbed by this situation and sets off to help prove his brother innocent.  What follows is a whole lot of red herrings and then a literal play-by-play of the entire court proceedings that goes on for about 30 pages.

If I learned anything from this book, it is that I prefer mysteries to be solved before court begins so that I do not have to read through court proceedings.  I suppose they are meant to be very sensationalist and breath-taking, but I didn't really find that to be the case in this book.  It started slow and then there was an entire character sketch of the dead man and a letter in French (which luckily, the author deemed worthy enough to translate into English for her readers).

If I learned a second thing from this book, it's that I really dislike when authors just litter their English-language books with French (and make those French words quite critical to the understanding of a major plot point) and give no translation of the words for their less-worldly readers.

I found this book fairly tedious.  Lord Peter, I think, is meant to be this bright beacon of reason and wit in his family.  But while I didn't like his sister Mary or his brother the Duke much at all, I also really disliked how disparaging and dismissive Peter was of them.  It was very, "Oh, I'm so unlucky as to have been born with a brain in this family while everyone else just messes everything up."

There is also a point at which he mentions wanting to take feudal rights with a beautiful young wife who lives on the moors near the house his brother has rented.

Really, when it comes right down to it, I finished this book firm in the belief that Lord Peter Wimsey has a pretty big ego and is very snobbish.  And then I got to wondering about whether perhaps Dorothy Sayers was snobby and classist, too.

One of the main problems I have with dialect in books is that it often isn't used only to describe differences in location, but is often used to show when someone is from a lower class.  This is one of the reasons The Help was scrutinized early in 2010.  Sayers does the same thing.  Granted, the English upper-crust historically all have the same accent, regardless of where they're from, while the members of the middle-class take on the twang of their locale.  But I can't help thinking that there is an inherent snobbishness in Sayers that comes through in her characters.  Most of the middle-class people are portrayed as having very heavy accents, not being very friendly or welcoming and generally only helping Peter when there was a monetary award in it for them.  And it doesn't stop there.  Peter's sister Mary (who is certainly not the brightest bulb in the antique family heirloom chandelier) heard a lower-class woman call the Duke by his first name and got "an odd shock to hear her brother's name spoken like that, by that speaker and in that company."  Combine that with Peter's stirrings of "sixteen generations of feudal privilege," and I just was not a fan of the Wimsey family.

I know that these books were written in the 1920s.  And to a certain extent, I enjoy them as windows and snapshots into a world that is disappearing.  But Lord Peter was in the Great War.  He fought and probably got PTSD.  He became great friends with a man named Bunter.  And what happened after the war?  He made Bunter his personal assistant.  According to that bastion of knowledge, Wikipedia, Sayers did this to play satirically on the British class system.  But if that is the case, I don't think Lord Peter knew it.

But the more I looked at Wikipedia, the more I distressingly decided that I did like Sayers and wanted to learn more about this man she created that has such a loyal following worldwide and is apparently quite complex.  Even though I didn't enjoy this book and really didn't like Peter much, I do want to get to know the author who said the following, when explaining why Lord Peter was so rich:


...it cost me nothing and at the time I was particularly hard up and it gave me pleasure to spend his fortune for him. When I was dissatisfied with my single unfurnished room I took a luxurious flat for him in Piccadilly. When my cheap rug got a hole in it, I ordered him an Aubusson carpet. When I had no money to pay my bus fare I presented him with a Daimler double-six, upholstered in a style of sober magnificence, and when I felt dull I let him drive it. I can heartily recommend this inexpensive way of furnishing to all who are discontented with their incomes. It relieves the mind and does no harm to anybody.

That's the sort of woman I can get along with.  So perhaps I'll give Lord Peter another try.  But not for quite some time, I imagine.
Musings by Aarti at 2:43 PM

Email ThisBlogThis!Share to TwitterShare to FacebookShare to Pinterest
Labels: 20th century, between the wars, england, mystery