Review: Cooking for Kings - The Life of Antonin Careme 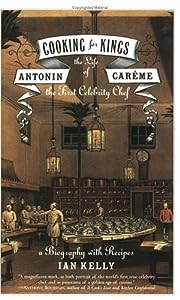 Cover via Amazon
I really enjoyed Ian Kelly's biography of Beau Brummell when I read it in 2006 and so when I saw Cooking for Kings:  The Life of Antonin Careme, the First Celebrity Chef soon after reading Brummell, I snatched it up.  And then let it languish on my shelf for over three years before finally picking it up to read.  But every book has its day and I've finally met the French culinary genius!
This is a fairly short biography- only 225 pages, and several of those pages are full of illustrations.  There is an extensive list of recipes at the back of the book, all of which Careme detailed in his many cookbooks.


The biography portion of the book is actually quite scant on details of Careme's life.  No one knows exactly when he was born, why he chose to marry who he married, why his daughter felt such animosity towards him or what his private thoughts on his many illustrious employers are.  All we know is that Careme started in the slums, rose through patisserie shops during the French Revolution, became a general chef who commanded the attention of such august personages as Bonaparte, the Prince Regent, Talleyrand, the Russian Tsar and the Rothschilds.  He invented the chef's hat.  And souffle.  He also was one of the first chefs to write his recipes down and share them with people- and to make a great deal of money by doing so.  Sounds like he must have had a pretty fascinating life, right?  But he is mum on his relationships with employers and mum on a great deal of subjects besides his own recipes.  So... what we get in the biography is a list of menus, some interesting anecdotal information on his employers and a lot of food commentary.  While I personally love looking at historic menus and reading detailed food descriptions, I wish that there was more information about Careme himself. 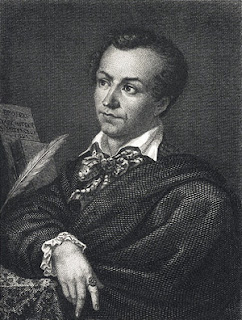 But what Ian Kelly lacked in biographical information, he made up for in supplemental material.  This is a beautiful book.  Its menus are presented in a very pretty orange color.  Its sketches (all taken from Careme's cookbooks themselves) are in green and orange.  There are full page and two-page full color paintings of people and places that were important in Careme's life.  Each chapter ends with a recipe, and then there are even more recipes at the end of the book.  The recipes sound delightful but are frustratingly vague in some cases.  For example, here is his recipe for Mackerel a la Stewart:

Boil trimmed mackerels in salted water.  Serve surrounded by a ragout of mussels, crayfish tails and mushrooms.  Garnish with mackerel roes, fried.  In England they like the mackeral masked in a garniture of boiled gooseberries.


Um... I'm pretty sure if ten people made the above recipe, there would be ten very different outcomes.  And perhaps in 1820, everyone knew how to make a "garniture of boiled gooseberries" and thus didn't need instructions, but I sure do.  Considering that Careme was very clear on the fact that he never improvised but always stuck exactly to his recipes, I think he could throw in a clearer measurement or two to ensure consistency in dish preparation.


More than anything else, what I loved about this book was its sense of setting.  Careme was so clearly a product of his time- a time when the nobility spent obscene amounts of money on things they craved, royalty threw lavish parties and the nouveau riche would do anything to gain entrance into Society.  Some of these menus are three pages long.  They feature ridiculous amounts of food.  There was a feast held in Paris for 10,000 people.  Careme helped cater it.  I mean, can you imagine?!  Helping cook a meal for 10,000?!  It's insane!  And just amazing.  While this book was short on biographical information, it was such a fascinating look at a decadent and sparkling period of world history.  Sadly, it is unlikely I will ever attend a dinner party that features something that looks like one of these: 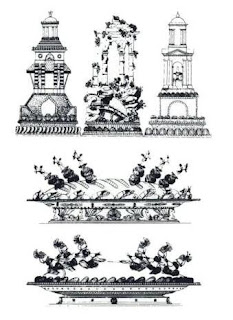 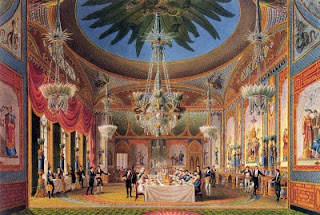