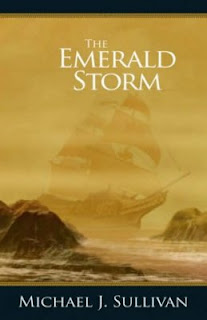 The Emerald Storm is the fourth book in The Riyria Revelations.  (See my reviews of books one, two and three.)  As you get further along in a fantasy series, it becomes impossible to write a plot summary that doesn't give away some sort of spoiler, so I'll just say...

Royce and Hadrian go off on another quest together.  Princess Arista embarks on her own, separate quest.  The Empress becomes lucid.  The plot thickens.

There we are!  No spoilers!

I must admit I didn't enjoy this book nearly as much as the three that came before it.  There was a lot going on and I didn't find much of it interesting.  I had a feeling that would be the case because much of this book took place on a ship.

As I found out very quickly when reading Red Seas Under Red Skies, I do not enjoy books set on boats, particularly ones that insist upon using nautical terms or choreographing battle scenes or describing coastline.  This book had a good amount of that (not as much as I feared, luckily) and I got bored by it.

One of my favorite aspects of the previous books was the friendship between the characters, particularly Royce and Hadrian.  While Royce and Hadrian were together in this book and were still the best of friends, it just seemed as though they were distant.  They didn't joke as much as previously.  Also, as some of the main characters were separated in this book, the author introduced several new characters, and now my head is starting to get muddled about who everyone is and what their relationships are.

I think part of my disappointment with this book is related to the fact that it is the fourth book in a series of six.  Thus, it suffers from having no rising action or falling action, but just further developments in the series' plot overall that I cannot see the entirety of.  I think I also dislike the whole "quest" part of epic fantasy.  I like the political machinations, the character development, the cultural aspects.  But the marching through forests full of enemies, making camp in the rain, and generally feeling miserable doesn't do much for me, and that was much of this story.

While this book fell flat for me, I did enjoy learning more about Royce and Hadrian's pasts.  They are two very fun characters and while I doubt Hadrian will find a woman that I think worthy of him, Royce has pretty exceptional taste.  I also really enjoyed learning more about the devious villain of the plot.  He seems clever and wily and I am confident he will make the remaining two books in the series as interesting as can be.  I am still a big fan of this series, and I look forward to the two concluding books.  Another major point in this series' favor- there is hardly any wait at all between books!  The fifth is due out in October.
Musings by Aarti at 7:53 PM