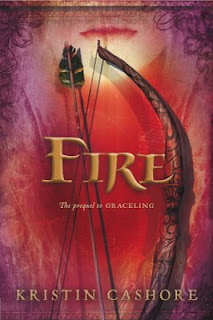 Fire is the prequel (but totally stand-alone story) to Kristin Cashore's Graceling.  It centers on Fire, who is a monster where she is from.  She is absolutely beautiful, has spectacularly red hair and has the power to make people want her, even against their will, and to use that power for her purposes.  Her father was also a monster, and used his power for such terrible reasons that the kingdom of the Dells is on the verge of civil war.  Fire does not wish to abuse her powers, so she tries to hide her beauty and stay away from others.  But when the king comes asking her for help to save their country, she must decide whether to use her power for good.


I wasn't overly impressed with Graceling when I read it early this year.  I enjoyed it, but I didn't love it the way I expected I would.  But as I am determined to get through all the fantasy series I'm in the middle of before starting any new ones, I wanted to read this and move on.  And I much preferred Fire to Graceling, perhaps because I haven't heard as much about it.

I think Fire is a more sophisticated story.  There is more going on- politically, emotionally, and morally.  The decision Fire must make about how to use her power and wield it for good is one many people must make.  It's hard to know when a gray area has been crossed into, and whether it's okay to step into the gray area if "the ends justify the means."  I find this particularly relevant when you consider how many people recently (and throughout history) have started out hoping to make the world better and then ended up corrupted by their power.  For me, Fire's internal conflict was very real and, like her, I am conflicted about whether I think she was right to use her power to help her country.

I appreciated that Fire wasn't the only one grappling with these decisions.  In a nation on the brink of war, everyone had to make them.  The king.  The military commander.  The spy network.  The landowners.  A handsome man who enjoyed bed-hopping a bit too much.  I like that Cashore showed each character facing his dilemmas and dealing with the consequences of his choices.

I found this book engaging, though I think Fire became a bit melodramatic towards the end, saying things like, "I don't want to love you if you're going to die."  Um... for obvious reasons, this is a flawed argument.  Other than that, though, I enjoyed this book and I don't think you have to read Graceling first to understand it.  Recommended for fans of young adult fantasy.
Musings by Aarti at 12:21 AM