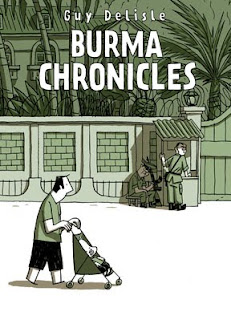 B
Guy Delisle's Burma Chronicles is a fantastic travelogue and political commentary memoir told in graphic novel form.  As an added bonus, it makes what must have been a very difficult and tense time seem humorous and fun.

Burma Chronicles details the year that Delisle, his wife (a physician working for Doctors Without Borders) and their baby Louis spent in Burma.  Burma is ruled by a totalitarian regime, and Delisle's humorous anecdotes about cultural differences are set side-by-side with commentary about the ways by which the regime oppresses the Burmese people.  Delisle lives in relative safety with the expats, but gets to know some locals well enough to realize that life can be a harrowing experience for the Burmese.
I am not sure if Delisle is the only person who does graphi
c travelogues.  He is the only person I know of, though that doesn't really mean much.  I would say, though, with my limited experience, that Delisle has a great idea, and does very well with it.  Why aren't more travelogues told in graphic novel format?  It's genius! 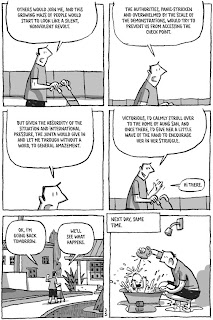 When I first picked this book up, I was skeptical that the format would work.  After all, a travel memoir of life over a year in Burma sounds as though it would include a great deal of politics and dissatisfaction and possible tirades.  But this isn't like that at all.  Delisle tells his story in vignettes.

Many of the frames involve him wandering around with a stroller and his adorable baby.  While there is an over-arcing story of his whole time there, most of the book is very episodic.  For example, he spends a few pages talking about his trips to the north, and describing how many checkpoints there are.  He spends a few pages describing Burmese grocery stores.  He then describes how many Burmese eat betelnut, and then will mention how he lives down the street from a former Nobel Prize winner who is under house arrest.

This works very well because he doesn't get bogged down in having to give his readers a huge back story on a country many know very little about.  Instead, he can just give us snippets of his life, and share his thoughts with us.  I really enjoyed this.  I loved learning Delisle's relationship with the nanny and his guard, his trips to all sorts of expat parties, his attempts at teaching the Burmese about computer animation, and everything else.  His humor comes out in nearly every frame, and I found myself smiling through most of the book, even as I began to understand just how difficult life in Burma must be. 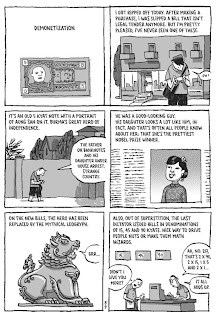 This was a very entertaining book, and while I don't know if I learned as much about Burmese history and culture as I might have by reading a different sort of travel memoir, I'm glad I went with this graphic format.  It was fun and engaging, and thoroughly kept my interest.
Musings by Aarti at 12:04 AM