Review: Three Men in a Boat (to say nothing of the dog) 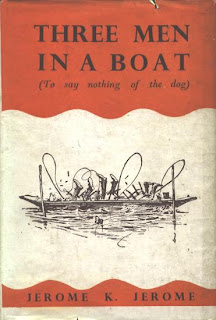 Thank you, thank you, thank you Ana for your review of Three Men in a Boat (To say nothing of the dog), by Jerome K. Jerome!  I would say something dramatic like, "I haven't read something this funny in forever!" but that would be wrong because I read The Wee Free Men just a short time ago and that book had me cracking up all over the place, too.

I have no idea what the plot summary of this book is.  Ostensibly, three (absolutely marvelous) friends living in London decide to take a boat trip up the Thames, with a dog named Montmormency.  The book is a recounting of their travel experience.  I remember my English teacher in high school telling me that The Portrait of the Artist as a Young Man was one of the best examples of stream-of-consciousness narratives in the English language, but I would say that Jerome trumps Joyce because his stream-of-conscious conversational narrative is absolutely hilarious and witty and amazing.

Stream-of-consciousness is when you talk about one thing, and then it jogs your memory of something else, so then you start talking about that other thing.  For example, perhaps you are telling a story about fishing, and when describing putting a fly on your hook-thing, you remember a story about how you got malaria while in the tropics.  So then you interrupt the fishing story to talk about malaria.  Jerome K. Jerome does this throughout his narrative, to fabulous effect.  Even when he's not using stream-of-consciousness, he is very reminiscent of Saturday Night Live's Deep Thoughts.

He sees people on the side of the river fishing, and then goes off for a while on fish tales and how everyone claims to have caught the biggest, baddest fish in the whole world.  Some people are under the impression that all that is required to make a good fisherman is the ability to tell lies easily and without blushing ; but this is a mistake.  He talks about work.  It is not that I object to the work, mind you; I like work: it fascinates me. I can sit and look at it for hours.  He talks about true friendship.  That's Harris all over - so ready to take the burden of everything himself, and put it on the backs of other people.  Weather forecasts.  I do think that, of all the silly, irritating tomfoolishness by which we are plagued, this "weather-forecast" fraud is about the most aggravating. It "forecasts" precisely what happened yesterday or the day before, and precisely the opposite of what is going to happen today.  He touches on hypochondria.  It is a most extraordinary thing, but I never read a patent medicine advertisement without being impelled to the conclusion that I am suffering from the particular disease therein dealt with in its most virulent form. 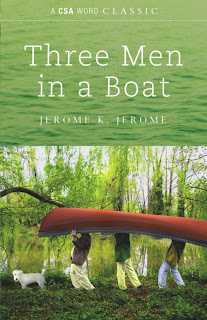 Jerome K. Jerome is like the Victorian Bill Bryson.  Three Men in a Boat is not a bad travelogue.  There are descriptions of every town visited.  Some of these descriptions are very flowery and veer into the almost poetic and reverent.  While I think Jerome is handy with a turn of phrase, they seemed a bit out of place in the narrative.  But that was fine with me because everything else was so fabulous.  But the book is not memorable because of the places visited; it's memorable because of the person who visited them and shared the story with us.  And that is where Jerome excels.  He could tell me a story about a trip through a paper bag and I am certain he'd have me howling with laughter.  And, as Ana said so eloquently in her review, "Sometimes humor is enough, isn't it?"

In this case, it absolutely is.  If you are under the impression that the Victorians were frumpy, with no sense of humor- give Jerome a chance to prove you wrong.  You won't regret it!
Musings by Aarti at 12:25 AM