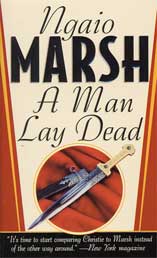 The Classics Circuit is back!  This time, it's the Golden Age of Detective Fiction and I used the opportunity to dust off a copy of A Man Lay Dead by Ngaio Marsh that was given to me three years ago by one of my closest friends who lives in Australia.  Talk about taking a long time to get around to reading a book!

A Man Lay Dead is the first book in the Inspector Alleyn series.  It was written in 1934, and from what I can gather, it is a book contemporary to the period.  I can't be sure because oddly, WWI was not mentioned even once, even in passing.  Often, I find that you can't read much that takes place during the 1930s without at least brushing on the subject of the Great War.  This book managed to do so; however, there was certainly commentary about Russia and a Russian character with a fairly bizarre accent, and that seems true to the period.

Anyway, onto the story!  Sir Hubert Handesley is famous for his country house parties, at which he provides fabulous cocktails and arranges parlor games for his guests.  This time, the game is (surprise!) Murder.  The light-hearted fun takes a turn for the macabre when one of the guests is found dead in the hall, killed by his own knife.  Everyone becomes a suspect and Inspector Alleyn of the Scotland Yard is called in to investigate the possible involvement of a Russian secret society.  He also gets to meet and befriend some of the house guests, two of whom find the detective life quite exciting.

One of my favorite things about detective fiction written in this era is the shifting social background.  There is the aftermath of the Great War, the growing suspicion of yet another war to come, shifting class structures, the fading away of the landed gentry, the power of new American money, and so much more.  For some reason, all these changes seem ideally explored via mystery novel to me.  Perhaps because the tension and suspicion between characters is often heightened by pre-existing prejudices relating to class or ethnicity, race or religion.  I don't know.  It just works. 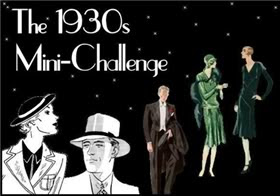 So I was a little disappointed that Marsh's novel didn't confront any of these issues except perhaps for race (though I am not even sure she confronted that one so much as she just had a Russian character).  There was a brief mention of the class system late in the book, too, by Inspector Alleyn which I found promising enough to interest me in getting to know him better.  But for the most part, all the Big Themes that seem to show up in books of this era are missing.  Instead, the book explored a somewhat bizarre plot around the secret society and a knife that never should have left the society and other oddities of that like.

So I was not really that impressed with this book.  However, it is the first in what was a very successful series of mysteries surrounding Inspector Alleyn, so I will give Marsh another try.  I really liked Inspector Alleyn as a character and would like to get to know him better.  If the series continues to give more tidbits of information on his background (he's highly educated, started down the diplomat route, and then chose to become a detective), then I have a hunch I will be hooked pretty quickly.  For all Alleyn was very friendly and kind and polite to everyone he came across, I feel he has a Large Cross to Bear that I would like to explore in greater depth and I am pretty sure he's going to be one of those Men of Mystery that really draws me in.  I also think he has many strong feelings about things that weren't shared in this first book.  For example, he must have been in active service during World War I.  What happened to him there?  What did he do?  Did it influence his entering Scotland Yard instead of becoming a diplomat?  Alleyn also bursts out at a character about how the upper-class has an aversion to sharing information, or having anything to do with airing dirty laundry, even though often this can lead to unsolved murders or innocent people coming to harm.  I think that is very telling of Alleyn's impressions on class and justice, and I'd like to know more. 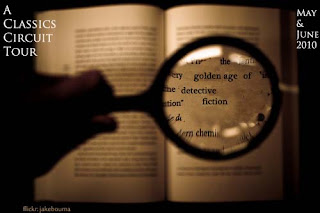 So really, for me, this book was far more about Alleyn than the plot or the mystery or anything else.  I hope to read more Marsh, if I can find her, and get to know her practical yet kind detective better.  I am excited to know where she takes Alleyn in future, and how he evolves as a character.  And I'd love, love, love to know more about his past!

This review is part of the Classics Circuit tour for the Golden Age of Detective Fiction.
Musings by Aarti at 12:02 AM